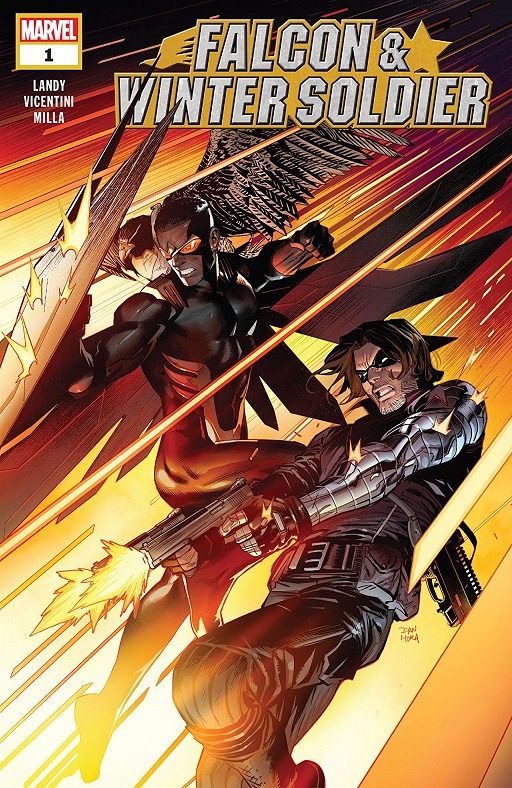 Bucky Barner: Formally the Winter Soldier and best friend to Captain America. Sam Wilson: Former social worker turned Falcon. Both have had the mantle of Captain America. Do they also have the same taste in clothes, jokes and situational awareness? My Magic 8-Ball says “Signs point to No.”

This week brought us the first issue of this new series featuring these two characters that share a common past role. The issue starts off with some random violence towards one of the two while the other walks into an office of death. We then discover that there is a plot whereas the remnants of Hydra are trying to reform. Along the way there is some random bantering and exposition before a new threat is revealed. This threat seems to be more than a match for our duo. What are we to get from this adventure? Only time will tell.

Reading through the issue I felt that it was good, however not great. Honestly, knowing these characters from the MCU will vary from their actual histories in the comics. However, as a new reader that may want to jump into this series based on Sam and Bucky, some readers may want to jump back out. Some of the dialog seemed like it was a little forced while others felt first-date awkward. The artwork overall was great minus some of the mid-scale renditions of Sam. Those felt like they weren’t detailed enough or just lacking in something I can’t grasp. The character of The Natural seemed a little over the top however some of the best characters in comics have come from very overt openings. As a whole, a fair start with the hopes of something more. We’ll be keeping an eye on this development.