I’ve been to many a comic con in my day. Most recently as a member of the press for my radio show but always as a fan. Out of all the ones I’ve attended, Fan Expo Dallas 2017 was probably the busiest convention that I can recall. I expected this to an extent. After all – just look at the line-up of celebrities and artists and special guests they had scheduled. For me, the main draw was Mark Hamill as this was his only scheduled U.S. appearance this year. But that didn’t temper my excitement for the likes of Khary Payton (who I was able to have sign my Young Justice Aqualad action figure) or getting my picture with Barry Bostwick (who I had just interviewed a few days earlier for my program) or from waiting patiently in line to have my comicbook promo posters signed by such creative royalty as Mike Zeck, Gail Simone, Adam Kubert and Jae Lee, just to name a few. 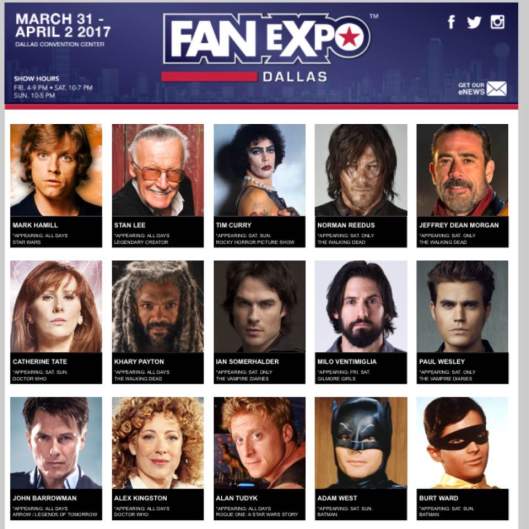 In fact, there were so many heavy-hitters and big name talent at the con that I almost felt like they could have added an extra day to help me squeeze everything in that I wanted to do / everyone who I wanted to see! The crowd on Saturday was huge partly due to the incredible roster of talent on-hand but also partly because Norman Reedus and Jeffrey Dean Morgan (Daryl and Negan, respectively, from AMC’s The Walking Dead) had to cancel their Sunday appearance. This led to a lot of Sunday ticket holders for autograph and photo-ops coming down on Saturday to try to redeem or exchange their tickets.

To the credit of Fan Expo Dallas, their volunteers and crew members were VERY good at organizing the crowd and they were all very well-informed about scheduling and providing information. Any question I had was answered quickly and politely and everything seemed to run very smoothly. The moderators of their panels (which were some of the most incredible programming I’ve seen to date) were energetic and did a splendid job of keeping things moving and fun. If there were any kerfuffles behind the scenes, they were not noticeable to myself or, one would assume, the average attendee.

Every convention has an energy to it… an intangible, electric feel that you notice in the moment but don’t really think about too much until afterwards. Fan Expo Dallas had a very high energy vibe that moved me forward around the floor like an invisible hand. It was almost to the point of sensory overload, in the best way possible. If I had to say a negative word, it would just be that I wish there had been that extra day (maybe add Thursday to the dates next year?!?!) to fit in some more panels, another couple of photo-ops (I would have LOVED to see/have a Kevin Conroy & Adam West Batman photo-op and a John Barrowman & James Marsters Torchwood photo-op, for example) or meet a few more celebrities who I just didn’t have time to get to see.

On a scale of 1 – 10, I would give Fan Expo Dallas 2017 a very strong and solid 9. Make note of their website, follow them on Facebook and Twitter so you can start planning now to save the date for 2018. Even though they’ll have their work cut out for them topping this year’s convention, I have no doubt that their team is already planning and prepping to do undertake that very task.