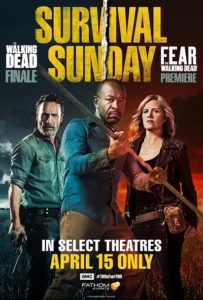 Tickets for “Survival Sunday: The Walking Dead & Fear the Walking Dead” can be purchased NOW at www.FathomEvents.com or participating theater box offices. 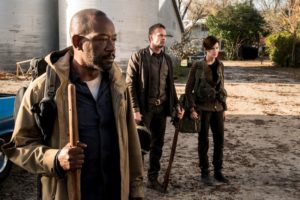 “Sunday, April 15 marks an epic and highly-anticipated moment for these series, as worlds collide when Morgan crosses over from ‘The Walking Dead’ and into the new world of ‘Fear,’” said Theresa Beyer, SVP of Brand Activation for AMC. “We are thrilled to be working with our terrific partners at Fathom to provide fans from across the country the opportunity to experience this crossover moment in such a special way and among other members of one of television’s most passionate fan communities.” 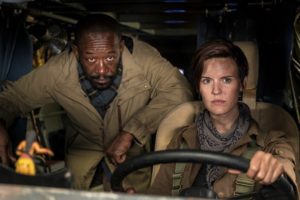 “‘The Walking Dead’ and ‘Fear the Walking Dead’ have captivated audiences and kept them on the edge of their seats for many years,” Fathom Events CEO Ray Nutt said. “Self-proclaimed ‘Dead-heads’ will have the unique opportunity to come together to experience these two compelling dramas larger-than-life and commercial-free on the big screen for just one night this April.”

AMC Channel Fathom Events Fear the Walking Dead The Walking Dead
Are you an Insider?News, reviews, & updates are just the beginning.