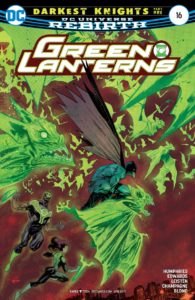 Simon Baz and Jessica Cruz have faced planet destroying monsters, intergalactic despots and supernatural horrors that cross dimensions of space and time, but even they are intimidated about traveling to Gotham City. In the first part of the “Darkest Knights” storyline, the two Green Lanterns are summoned to Gotham by Batman himself to help him with a series of fear based attacks by ordinary citizens. After taking down an attacker who feels an overwhelming need to kill the Batman, the Green Lanterns are introduced to Batman’s world and his city. Batman has called the Lanterns because, even though Simon is convinced that it’s the work of Scarecrow, the victims show no sign of toxins in their systems either through inhalation or injection. Batman thinks the outbreak of fear is the work of the Sinestro Corps. 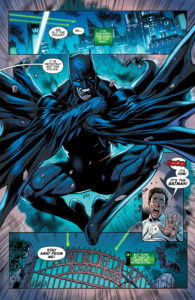 As Simon and Batman get into a back forth argument about Simon’s gun, a scene that seemed unnecessary and tacked on, Jessica is able to pull up a series of online videos that indicate that someone is using yellow fear energy to infect people. The situation only gets worse when the trio are confronted in the Batcave by a similarly infected Alfred who proves tougher to take down than any of them thought. 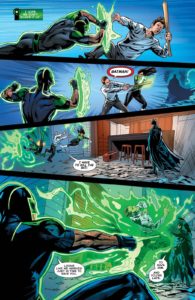 As team up stories go, this is a good start. Batman teaming with the Green Lanterns is a bit of a stretch in credibility, but I enjoyed the fact that Sam Humphries script gives deference to the reputation of both Batman and Gotham. It’s a testament to the characters longevity that, even without super powers, he can still intimidate. Neil Edwards art is well done. While some of the backgrounds could use a little more detail, he composes a scene really well. The characters are shown a level of detail that makes them dynamic and he’s able to bathe Batman in darkness and shadow even in a room filled with light from the Lanterns themselves. Other than the “Simon has a gun” plot point, whose pay off was a little predictable, this is a good first chapter of this arc and I look forward to the next one.