This week’s episode of Arrow seemed to have it all: Mayor Oliver Queen fights impeachment, Vigilante returns, Mr. Terrific gets his T-Spheres AND…. we finally learn the identity of Prometheus. But one thing at a time. The episode opens with Oliver, Quentin, Thea and Adrian trying to determine the best course of action to make sure that Ollie stays in his position as Mayor of Star City. If he is impeached, then Prometheus wins. After leaving the initial impeachment hearings, Oliver’s limo is attacked by Vigilante who has decided that Mayor Queen’s cover up of Green Arrow’s murder of Detective Malone warrants more than just removal from public office. Luckily Dinah and Thea manage to keep Vigilante from killing Oliver until the SCPD arrive on the scene. 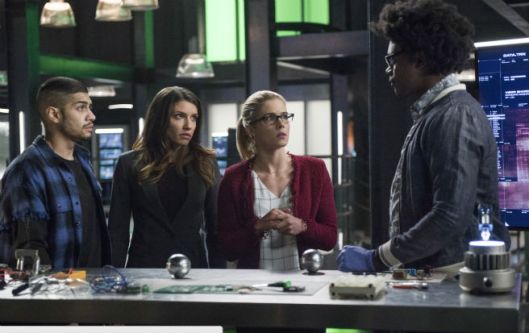 Meanwhile, Curtis has been working on his T-Spheres which are high tech devices for both offense and defense. When Dinah finds a piece of Vigilante’s mask containing specialized circuitry, Curtis realizes his T-Spheres (don’t call them his “balls”) can lock in on the origin signal and track Vigilante back to his hideout. While they are working on implementing this plan, Vigilante has a run in with Prometheus who warns Vigilante to stay away from Oliver Queen. After a short-lived but fierce battle, Prometheus unmasks to reveal his true identity. (No spoilers from me. Go watch the episode already!) 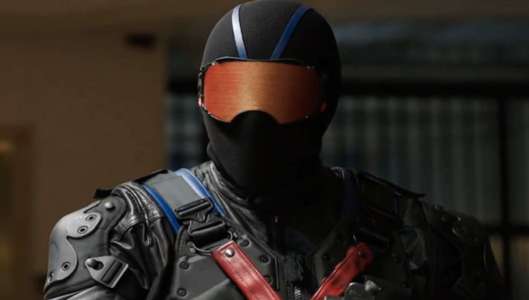 Intermixed between flashback scenes of Oliver’s time in Russia helping to save Anatoly by proving Gregor was siphoning funds from the Bratva for his own purposes, we see Diggle try to convince Felicity to give up her connection to Helix before she gets burned. This theme of “getting too close to the fire” resonates with Thea’s story arc as well and we see her wrestle with the idea of blackmailing a city council member whose swing vote could potentially save Oliver’s political career. After a public speech in which Oliver declares the cover-up was designed to keep the public from knowing that Green Arrow had become a cop killer, the vote comes back against impeaching Oliver (as Diggle, Wild Dog and Mr. Terrific keep Vigilante from assassinating him). Thea decides that she needs to leave and feels she’s traded blackmail and politics for arrows and knives. Oliver accepts her resignation just as Felicity decides to go full-throttle into the game with Helix and Adrian Chase approaches the newly re-instated reporter Susan Williams about a very important story he needs her to tell.

Overall, this was one of the more solid episodes in a very strong season for ‘Arrow’. We had the return of Vigilante (who I always loved in the comics) AND we got to see a classic villain vs villain fight as he squared off against Prometheus. Also, mainly because I am a huge fan of Mr. Terrific in the comics, I was ridiculously excited to see the show introduce his T-Spheres as a means of bringing him even closer to the realized comic character. Between the excellently paced action and the underlying drama, I can’t wait to see where the story continues to go from here.