Fighting for Survival in The Walking Dead 163 Review 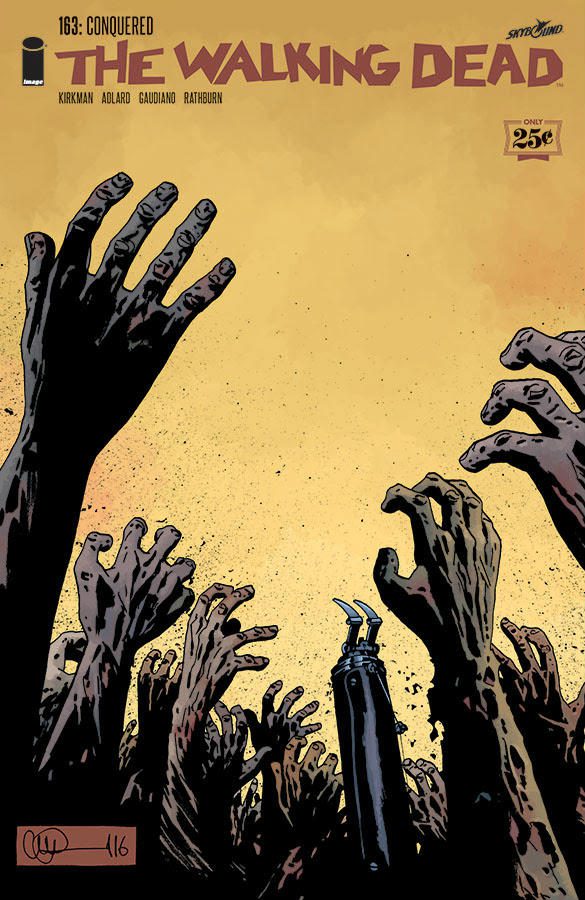 The Whisperer War may be over, but Alexandria’s fight for survival has just begun. The sea of the dead that Beta and the Whisperers unleashed on Rick and co. starts to overtake the town. This issue is chocked full of intensity, as everyone scrambles to confront the biggest challenge the characters have faced. (And this great issue is only twenty-five cents to celebrate the twenty-fifth anniversary of Image Comics! Everyone should get it.) The pacing is right on, as Robert Kirkman’s story stays with Alexandria the whole time, rather than also jumping to the Hilltop, Kingdom, or Sanctuary. This helps to gradually build the excitement page to page. A major theme Kirkman threads throughout is trust—Rick trusts Eugene; Dwight; Negan (even for a scant moment); Andrea to keep everyone safe; and the townspeople trust Rick. But with a problem this big, trust just isn’t enough.

Everyone barely has time to react as the issue starts with the roaring sound of the dead. Eugene, Andrea, Dwight, Jesus, and Michonne rush out to divert the horde, while those left behind attempt to hold their ground. Sidiq suggests to evacuate the town, but Rick says to trust him that the walls will hold. Perhaps Rick is trying to comfort the people; he knows the size of the horde and that the walls won’t hold at all, but it comes off as a bit cocky and irresponsible. When the walkers start to push against the gate, it’s Negan who steps up—perhaps finally out of his daze from losing Lucille—and picks off walkers at the fence one by one.

Michonne, as usual, shows her badassery as she jumps off her horse and starts taking out walkers with her katana and tells Jesus to do the same: “We each take five or six turns . . . we’ll be done.” It aligns perfectly with her character, as she’s never one to just sit back and let the events unfold. With several of the main characters out trying to lure the massive amount of walkers away and with the horde breaking through Alexandria’s defenses, the tension keeps building and building—something Kirkman often excels at in his storytelling. How can they all make it out alive? It seems almost impossible. I still think everyone will be out on the road again (perhaps heading to Ohio) and all of the safe houses will be overtaken. Similar to last issue, the Sanctuary is just biding its time to swoop in, but what’s the point? There won’t be anything—or anyone—left.

As always, Charlie Adlard’s art includes a variety of shots—close up, landscape, mid-range. He also perfectly captures facial expressions as the characters’ stress levels heighten from page to page. You can feel the fear that they feel. They start off a bit relieved, thinking that the group will be able to divert the horde and the gate will hold, but in no time at all, they know that was too good to be true. His full-page 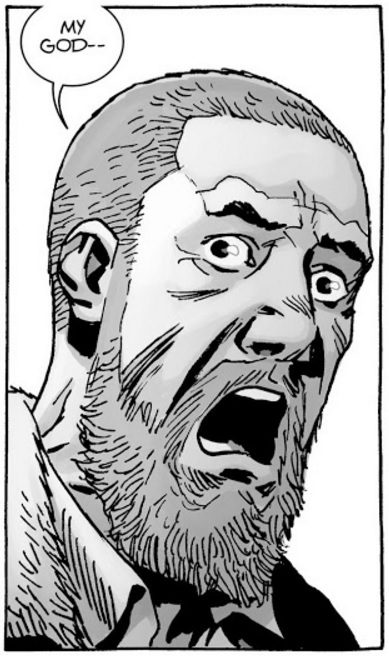 spreads are always my favorite because of all the detail. I especially love the one with the walkers pressing themselves against Alexandria’s gate—mindlessly trying to get in as they trample their fellow walkers who have fallen.

This issue’s cover is quite attention grabbing, featuring several zombie hands reaching, grasping for the sky. Right in the middle is Rick’s—well, his hook. Dave Stewart’s coloring is right on. The yellow in the background with the purple hues of the hands provide a nice contrast and pop. The cover could symbolize many things—literally Rick is among the dead, so is going to become a walker. (Boring.) Perhaps more likely, it symbolizes him being right in the center of the action and fighting for his people. It symbolizes hope. He’s desperately reaching to escape from the horde to protect his people, and he won’t quit. In celebration of the twenty-fifth anniversary of Image Comics, there are two variant covers of this issue. Both drawn by Adlard and colored by Stewart, the variants (one in color and one in black and white) feature Rick dressed as Negan—with leather jacket and Lucille in hand. But is Rick becoming Negan, or is Negan becoming Rick? As we see in this issue, Negan motivates the people of Alexandria and sticks his neck out for Rick. 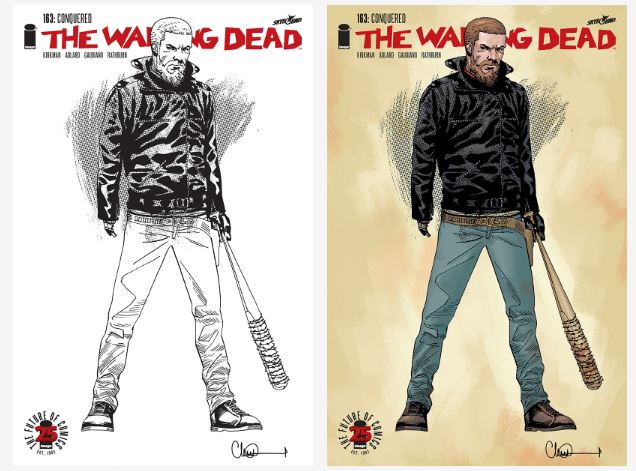 For a twenty-five cent issue, Kirkman does not disappoint, not that we expected him to. This is a great start to the post-war arc. The chance for all of the characters to survive seems slim to none. I hope Kirkman continues on with the pacing and intensity he’s set up thus far as the characters fight for survival in the issues to come. We get another issue this month, and I can’t wait!