“I feel like I’m just floating by, you know? One day I wanna do this, the next day it’s something else.  I guess I just need some guidance.” We’ve all been there. The broken car, the dead pet, the lost job – bad luck is a factor in life that nearly everyone has to deal with. In Fishbowl California, the debut feature from writer/director Michael A. MacRae, we follow a colorful cast of characters that have nowhere to go but up. Check out the trailer below.

No money, no job, a cheating girlfriend – Rodney (STEVE OLSON) is at the end of his rope with no prospects to speak of. With nowhere to go, Rodney drives aimlessly around until his car quits on him, leaving him stranded in front of a strangers house. The next morning he’s awoken by June (KATHERINE CORTEZ) an ailing drunk widow who busts him for stealing her electricity. Instead of having Rodney arrested, June puts him to work around the house. June’s increasing pity for Rodney eventually earns him a temporary spot in her home which lasts longer than they both anticipated.

“Everyone has problems,”  June spits at Rodney, “take them somewhere else.” It’s these interactions that are the driving force of the film. The unlikely bond that is formed between June and Rodney is not romantic in nature, yet still pays homage to the classic pairing of Harold and Maude. Two people at completely different points in their life that still learn from each other to rise above their desperation and depression. Fishbowl California does an excellent job of pondering the theme of hopelessness through well-developed characters. Writer/Director Michael A. MacRae does an impressive job of not falling in love with his own characters and allowing their flaws to help motivate their actions.

Standout performances from Steve Olson (New Girl, Those Who Can’t) and Katherine Cortez (Quantum Leap, By Dawn’s Early Light) separate Fishbowl California from its peers. By tackling the correlation between millennial entitlement and despair, we as an audience can buy into the story on a believable and emotional level that creates a compelling story told in a small scale.

Where Fishbowl California stumbles is in the low production value, something that can often be seen in the small setting and shaky camera work. Framing and focus often became distracting as the handheld camera shots often blurred some characters.

Stand-out performances elevate this indie dramedy above its peers. 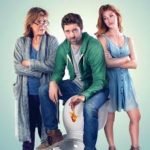