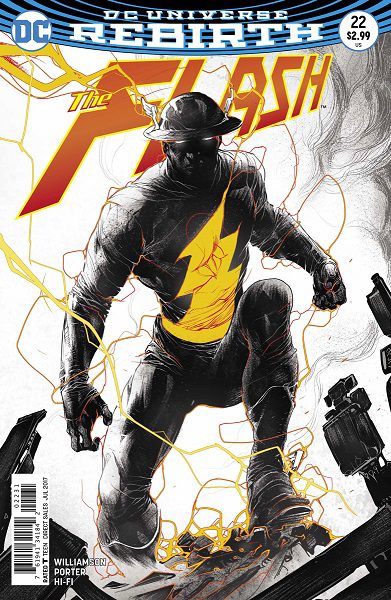 The hype and mystery around “The Button” crossover was well deserved after a year of hints and patience. While some of the mystery leaked out early or was telegraphed for months, the journey to the end of the event is worthwhile. Knowing that readers will have to wait until November for the next big chapter of the mystery does remove much of the urgency and excitement that built over the storyline, but that does not prevent Flash #22 from being an enjoyable and well-crafted chapter to that mystery.

Joshua Williamson and Tom King four-part four part crossover as the next chapter of the larger Watchmen storyline. Pacing issues of the four part crossover aside, this issue ties up some emotional loose ends to the Flashpoint universe. The reveal of Reserve Flash’s confrontation with “God” is underwhelming because it reveals a character that readers already knew about and adds little to the larger mystery or to the character of Eobard Thawne. The biggest downside to Flash #22 is that Batman #22 was the emotional heart of this crossover. Bruce Wayne meeting his father, the Flashpoint Batman, contained an emotional resonance that is rare in comics.

Flash #22 feels shallow compared to that emotion, but as the next chapter of an evolving mystery, Williamson’s tale feels essential. Readers do get the return of Jay Garrick and the first textboxes from Dr. Manhattan. Jay’s return is brief and not complete, but does provide openings for future issues of the Flash to explore. Garrick may save Flash and Batman, but memories of the Golden Age Flash and other members of the Justice Society of America are mysteries left unanswered. 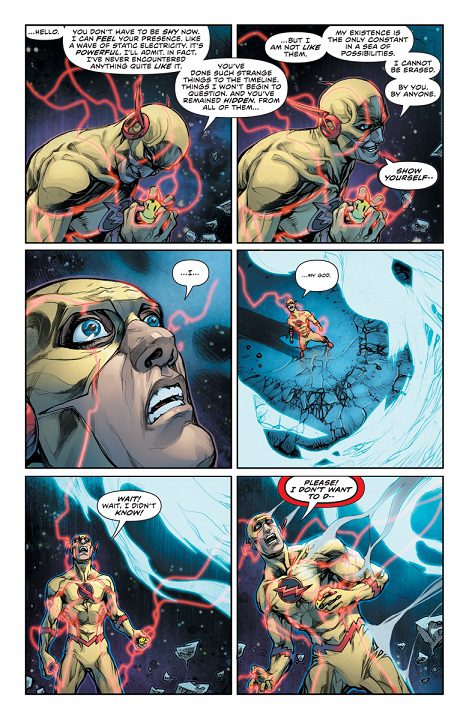 Williamson and King understand that Bruce and his father were the heart of the story and the final 9 panel page layout with Bruce could be more significant than any revelation involving Dr. Manhattan. Howard Porter’s art captures this moment beautifully. The emotional turmoil has rattled the stoic Bruce Wayne and the subtle use of shadows and posture provides the reader an intimate moment with Bruce Wayne, not as a hero but as a father and a son.

Porter also captures the movement around Jay Garrick and the speed force well. There is an electricity to his panels surrounding the return of Garrick. Porter appears to use the likeness of the square jawed John Wesley Shipp for Garrick which captures the age, experience, and compassion of the Golden Age character wonderfully. Hopefully readers have not seen the last of Garrick. The mysteries around his failed return create a new thread for fans to follow.

Flash #22 is a necessary conclusion to a crossover that raised more questions than it answered. Williamson’s writing and Porter’s art make the journey more satisfying that than destination.  Personal moments of each hero’s failure and loss stick with readers well past any new tease at the larger Rebirth mystery.