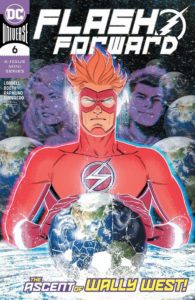 (WARNING: Spoilers for Flash Forward #6 ahead.)

So often, Superman and Batman get all the attention for being at the center of the DC Universe. For different reasons — and the respect warranted. But the pressure and responsibility that’s put on Wally West in Flash Forward #6 is next level.

Now, it’s been clear for a while that Wally is one of the most important figures in DC for a while. To be “The singularity in all the Multiverse” though? That seems unfathomable.

Especially when there’s another Wally West in the DC Universe that he’s met. Does this mean the Wally who made his first appearance at the start of Rebirth isn’t another version of the Earth-0 Wally? Sure seems like that’s the case based on Tempus’ aforementioned line.

Have you seen this:
Devil's Reign #1 (Review)

And if that is, in fact, true, that’s a lot to take in — never mind the whole Multiverse-saving stuff. We’re all told we’re unique in our own way, but the characters of DC know for a fact there are different versions of themselves that exist somewhere. Apparently, that’s not the case with this Wally.

Still, he did what he needed to do and saved everyone. But after the last few panels, the question with Wally has to be: will he continue to put the interests of the greater good first, or do he and the Morbius Chair have different plans now. Because Scott Lobdell and Brett Booth did not guarantee anything about Wally’s future on the final page of Flash Forward #6.