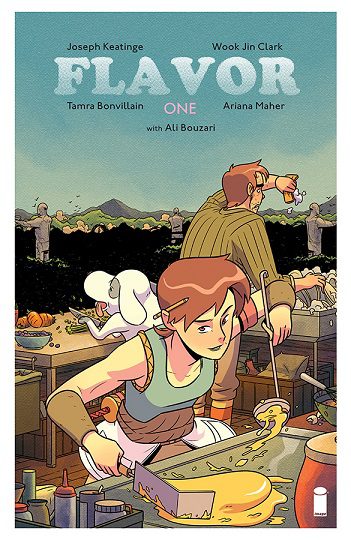 Anytime a new series is set to come out. I always try to take a look at something that I wouldn’t normally put on my pull list. So this brought me to check out Flavor #1, where a teenage girl named Xoo is trying to help her family’s restaurant. From the get-go, I had a real good laugh once I realized that Xoo and her dog were riding a bike together, except she was in the passenger car and her dog was the one peddling. So this helped give me an idea of the tone that they were aiming for. Aside from that and one other very cute and funny moment, you begin to see how much heart there is in Xoo as she desperately wants to do all that she can to help out.

She is also very defiant about her wanting independence from certain laws of the city as a representative has shown up to let them know what may happen due to Xoo’s families current situation. There is definitely a great amount of heart in Xoo and she shows how truly passionate she is in the culinary world. She still has a lot of growing to do as she is hesitant on receiving help and that kind of stubbornness is what could close down her family’s restaurant regardless of her well intent. There is also a bit of a curveball thrown at the end of the first issue and I won’t be giving away what that is. Obviously, it’s to keep the reader to come back but I do think Xoo is a character that people can latch on too depending on what kind of actions she takes moving forward.

The issue also does this really nice way of showcasing the team on this book with each name showing up on separate panels almost like a credit sequence at the end of a film. It was different and I think it’s a great way to introduce a creative team on a first issue instead of the typical way of having all the credits slapped on in the corner of a page. Even though we didn’t get too much cooking in this issue, I’m very much interested to see what sort of creations the culinary consultant they brought into the team will bring us. As for a first issue, I’d say this was a well-done appetizer.