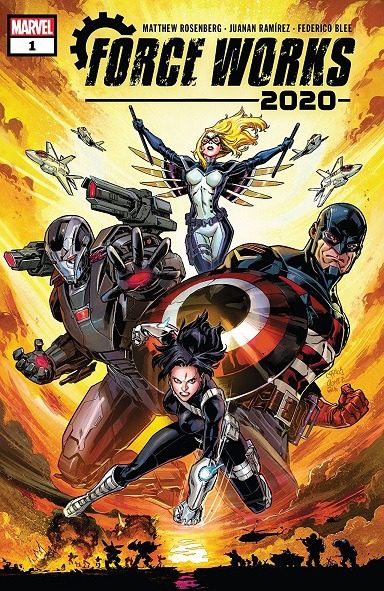 The original Force Works team was born in 1994 out of the ashes of the West Coast Avengers. Tony Stark started the team to address threats in ways traditional Avengers could not. While it wasn’t as “extreme” as mid-nineties comics could be, it did provide a unique twist on the traditional superhero team. Force Works 2020 is the first time the team has an official series since then. Force Works has been mentioned on and off, since the events of Civil War but never seen in action. Matthew Rosenberg brings the group to the forefront in the developing A.I. revolution storyline happening across Iron Man and other series. Rosenberg’s take on Force Works positions them as a S.H.E.I.L.D. strike team and throws readers into the mix of their existing dynamics. The end result is a compelling use of underutilized heroes and the potential for future adventures.

Rosenberg’s Force Works team starts with a nice nod to the origin of the team with the very`90’s military hero Solo. While Solo quickly leaves the team, there is another`90’s era hero already on the team, U.S. Agent the off brand Captain America. War Machine joins S.H.E.I.L.D. agents Mockingbird and Quake in rounding out the team. The original Force Works team often leaned into the darker reflection of the Avengers providing a home for characters with a little more baggage. That same approach appears to be used here with the military background of the team. Rosenberg doesn’t dig into those potential inner demons much in this opening issues, but he does provide space for War Machine to question his place as a hero. There is plenty of room for Rosenberg to grow and develop these characters and to take the series beyond straightforward action.

Currently though, this first issue is action heavy and light on emotional context. The team is not experienced fighting together and struggles to survive a battle with a group armed with Deathlok technology and abilities. While the emotional drama is light, the action is successful. The art by Juanan Ramirez captures the chaotic flow of combat, providing both a sense of movement and intimate hand to hand fights. Federico Blee’s colors provide a darker, shadowy tone that matches the characters. The consistency of the characters’ dark costumes plays into the military feel of the team.

Force Works #1 is a quick introduction to a team with potential. These are not Earth’s Mightiest Heroes, nor are they colorful and flashy superheroes. What they are are heroes with a past and a sense of duty. Each of these characters is usually relegated to supporting roles and this provides Rosenberg room to expand and define the team as the series grows. As Rosenberg draws out that sense of duty while dealing with their past, he will make this series and these characters successful.