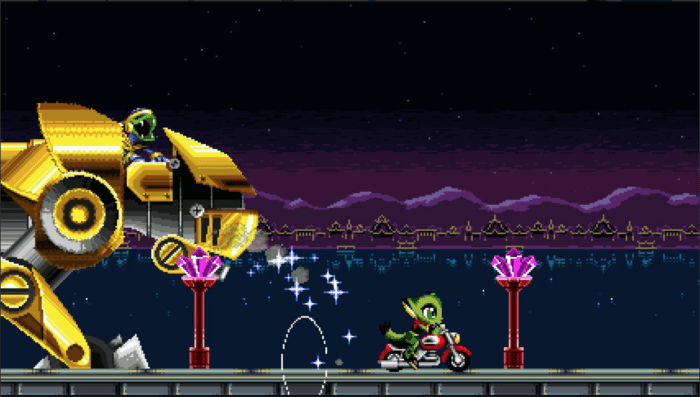 Nearly four hours went by and I was already rolling the credits on Freedom Planet’s adventure mode. I tend to put games away once I’m done with them, right after I finished God of War I put the game away and I never went back to it, but Freedom Planet kept me coming back for more. Freedom Planet mixed the speed that Sega brought with Sonic and it added action/combat to the formula resulting in a great time. Every stage that I played in this game felt different, adding enough puzzles, enough secrets, to make each stage feel and play unique. At the end of every stage, players engage in a boss fight and I never thought a game as fast as Freedom Planet could add bosses that were interesting or fun. The bosses in the game are tough and require precision, platforming, and speed to be defeated. Towards the end of the game, I switched the difficulty to “Casual” setting because of how tough the bosses/stages were getting, but even in a lower difficulty the bosses/stages provided a level of challenge. Sure there were moments where Freedom Planet’s bosses will make you want to quit, trust me there were a lot of times where I wanted to put my Nintendo Switch away and never play this game again but I needed to find out where this game would take me next.

Each level in Freedom Planet feels unique. In one particular level I was collecting hard drives to open up doors, and on the previous level, I was running through China as fireworks went off in the background as I was riding a motorcycle through the stage. The level design on each of these levels never felt boring or rehashed from the previous level, each level felt fresh and new.

Where freedom planet failed to grab me is in its character design. Sonic Mania brought our favorite blue hedgehog to our consoles, along with Knuckles and Tails. Sonic’s characters are known everywhere, (and I know that they have been around forever where Freedom Planet is just starting), but there is something about those characters that set them apart. Freedom Planet brings two starter characters, Lilac the Dragon and Carol the Wildcat, but these two characters didn’t do anything that made them truly stand out. I had just beaten adventure mode and I didn’t even know the name of the character that I had spent the last four hours with. Each of these characters comes with their own abilities and play styles. Carol the Wildcat can ride a motorcycle, while Lilac can dash similar to Sonic. Each of these characters plays so differently that playing through the adventure mode with each character feels like a brand new experience.

Freedom Planet offers a lot of replay value with its three different modes. Adventure mode its a mixture of gameplay and story, if you are like me and don’t care for the story in these type of games adventure mode may not be for you. Casual mode offers an opportunity for players to run through the stages in order, this mode is for the people that really don’t care for the cut scenes and just want to play this awesome game. Finally, Freedom Planet offers “Time Attack”, where you are racing against the clock. Not only does Freedom Planet offer three different game mode, but Freedom Planet also offers a variety of collectibles giving you a reason to go back to each level and trying to unlock everything. There is enough content in this game to keep you coming back after you roll the credits.

I never knew Freedom Planet even existed prior to this and man, I glad I know of this game now. Having played this game and experiencing everything that it has to offer I cannot recommend this game enough. If you liked Sonic Mania you owe it to yourself to give this gem a try. Though the characters are not as memorable the gameplay more than makes up for that.  Freedom Planet may look like a Sonic clone but Freedom Planet is in a league of its own, one that in my opinion its leaps and bounds better than Sonic Mania.