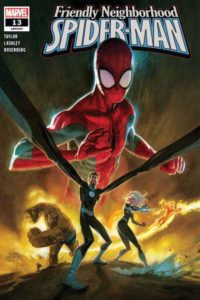 Comics can be exciting, emotional, or even inspiring. And sometimes comics just are comics. Friendly Neighborhood Spider-man, unfortunately, is just a comic. It is a fun ride that sees Spider-man team up with the Fantastic Four, but everything feels like a one-off adventure with this classic team-up. For what should be the conclusion to a story arc started back in issue #1, the pacing and story beats feel rushed.

Tom Taylor has peppered this series with the human elements of Peter Parker and Spider-man, but little of that is present here. In the last issue, Peter spent a few pages with his Aunt May at the hospital, had an emotional heart to heart with MJ, and later had a sweet interaction with the daughter of a police ally. But here, Spider-man and the Fantastic Four dive into an underground adventure with little emotional interplay. The team-up is looking to confront the ruler of the underground civilization Under York and ends up helping lead a revolution. This setup could provide a number of powerful character moments, but instead turns to action - action that is quickly resolved through briefly explained science. The confrontation is equally brief and ultimately does not develop Spider-man as a character. There is some character development for Leilani, the mother of two mysterious twins introduced in issue #1, and her sister. Unfortunately, even this development gets a brief interaction and resolution.

The setting of Under York is colored well by Rosenberg and creates the feeling of a unique underground world. Rosenberg’s colors provide consistency to the uneven artwork by the four artists. Having an issue drawn by multiple artists often works when the setting and art shifts throughout the book, but here the setting remains constant while the depiction of character details varies by artist. Pere Perez’s work in the previous issue is missed as the artists here patch together page after page. The details and dimensions of Ben Grimm and Johnny Storm’s shift throughout the title and the lack of detail only accentuate the rushed feeling of the issue.

Taylor’s dialogue and banter is the highlight in an otherwise run-of-the-mill comic. Friendly Neighborhood Spider-man #13 is a standard superhero adventure that could work as a Spider-man tale in any decade. Fortunately, this series is strong enough to survive a few stumbles and will keep swinging even with the frayed web of this issue.