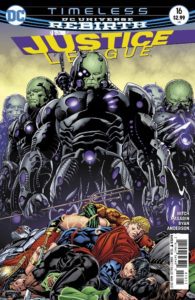 In the second part of the Timeless storyline, the trio are trying to convince Batman that they have a plan to stop the changes in the timeline and the subsequent changes in history itself. The only thing that they need in order to accomplish this is the cooperation of Superman. Batman has to remind them that this is not the Superman that they fought with and that his agreement to anything is not as cut and dry as they might hope. As they bring the Dark Knight up to speed on the events surrounding the timeline, a cryptic message is broadcast to the members of the League scattered throughout history. What this message means, they don’t know. But they better find out soon, because the cause of the time waves that are changing history has arrived. 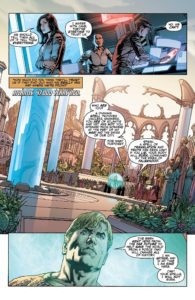 Have you seen this:
Something Is Killing The Children #16 (REVIEW)

The leagues is scattered, Aquaman in ancient Atlantis, Wonder Woman at the dawn of the Greek Gods, The Green Lanterns trapped in a future surrounded by other lanterns of the spectrum and Barry Allen transported to the moment of his becoming the Flash, the Justice League finds themselves in a mystery that could shake the foundations of everything that they are and hold dear. Cyborg’s presence in the far future and Batman’s ability to be outside the events might hold the key to unlocking this mystery. As Superman arrives  with his only agenda being to save his family, he decides that the direct approach might just be the best way of getting through to the invaders. A feat that might do more harm than good.

There is a palpable sense of urgency to this issue that could easily have been exploited to force an action beat that wasn’t earned in the plot, but Bryan Hitch decides to pull back and concentrate on the story, the characters and the stakes in this issue. The plotting and pacing work really well and the art by Fernando Pasarin is great. It really compliments the story in that it also allows for the reader to visually pull back along with the plot and really get a sense of the scale of this new threat to both the world and time itself.