Gears of War: The Rise of Raam TPB Review 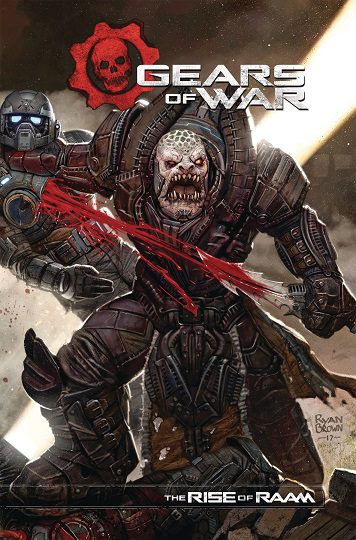 Gears of War: The Rise of Raam TPB
IDW Publishing

Gears of War: The Rise of Raam puts us in the shoes of General Raam and his comrade Skorge in the middle of a war with the Lambent. The story of Rise of Raam is set a before the events of the Gear of War game and for someone that loves that series, this is great. From the moment that general Raam steps into the scene in Gears of War, he was captivating but didn’t get his moment to shine, in Rise of Raam, the general gets his moment. In this issue, you will find everything from betrayal, to politics that the locust have to deal with, to a full-blown war, and though there are moments that feel like the story is dragging Rise of Raam ending alone is worth your time.

For everyone that is familiar with the Gears of War series, you will see a lot of familiar faces. In this issue we have queen Myrrah, you have the lambent, Skorge, and Raam, but this issue also introduces characters like Uzil and Ukkon. Uzil and Ukkon were never introduced in the Gear of War games and I wish they had been after reading this issue. Every character has its turn to shine but its Uzil and Raam that steal the show. At the end of the trade, I could sympathize with Raam and I could tell what his motives were, something that I couldn’t do at the end of the Gear of War game. The Gears of War series has always been identified with comradely and its the same kind of comradely that we get here in Rise of Raam. The relationship that Skorge and Raam share throughout the issue is very similar to the one that Dominique and Marcus shared in Gear of War and it is a relationship that kept me wanting to read more. The issue does feel like it drags at times, especially in its middle section of the comic, but the conclusion of this issue is one that you need to stick around for, trust me its worth it.

The art for this series is amazing! The issue has pages where full battles are taking place and it feels as if you could play in these pages. I am not kidding when I say that some of these pages feel like are pulled straight from the video game. Gears of War has always been known for its muddy and gritty art style and its the same art style that you will find here in this issue.

Fans of the Gears of War series will definitely enjoy this series, but I am afraid that those that have never been into this game will feel left out. There are some Easter eggs in this trade that I will not point out, but when I found these Easter eggs I couldn’t help but smile. If you are a fan of Gears of War I couldn’t recommend this enough, pick it up to give it a read, its worth it. If you are not a fan of this series, I say this will not change your mind on the series. Rise of Raam offers enough for fans to love here but not enough to turn non-believers into believers.