What an amazing gaming experience it was to attend Gen Con 50!

The event broke many of its own records including the number of attendees, being just shy of 208,000 attendees throughout “The Greatest 4 Days in Gaming.” From my experience from Thursday through Sunday, it was packed but not to the point of immobility. The convention did a wonderful job of spreading the entire event out, from having the main convention hall with approximately 500 exhibitors from the Lucas Oil Stadium (where the Indianapolis Colts play football) to the pristine JW Marriot hotel where a combined 19,000 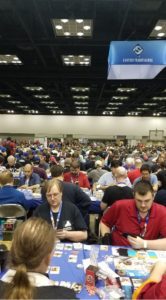 ticketed events took place. Those events range from Anime activities, Board Games, Collectible/ Non-Collectible Card Games, Electronic Games, a film Fest, Historical and Non Historical Miniatures, LARPing, and Roleplaying games. Every conceivable gaming system and universe could be found throughout the four days; The Wizards World of Harry Potter to Dungeons and Dragons first through fifth editions, Star Wars to
Cthulhu, there really was a gaming event for everyone of any gaming experience. I personally ran two games during the convention and they were the highlights of my experience.

First, I got to Dungeon Master a game I wrote and fleshed out that I have run a few times with my friends back home. Getting to see new players’ eyes light up when they get an inside joke (Timothy the Enchanter/ Rabbit of Caerbannog) was worth the effort I put into the game. I got to express my story in such an immersive and chilling manner that my new friends told me they had shivers run down their backs. Hearing their feedback of how enjoyable my interpretation of H.P. Lovecraft in a Dungeons and Dragons game was, had me on cloud nine.

I also got the joy of helping a first-time player to a gaming system learn the basics and by the end of the session, he could roll the dice with any experienced player of Star Wars from Fantasy Flight Games. Granted my game was scheduled during a key speaker event in one of the other convention building and 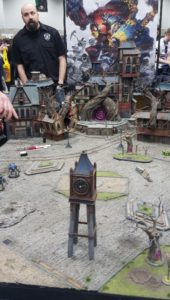 was left with only two out of five players, we were able to channel all our creativity to make up for the missing players. Overall it was a great growing experience for myself as a game master.

With over 500 exhibitors trying to demo their new games and get new players hooked interested in their product, it would have been impossible to fully see every booth and game, while attending the other events of the four-day show. Every day we walked the main show floor, it felt like there was a new game we hadn’t seen the day before and were just blown away by how massive the hall was. There were a few booths that were basically the same like; specialty dice vendors, leather and armor, wooden dice holders and other common gaming supplies. Mixed in between the countless board games and miniatures and the main companies like Paizo and Fantasy Flight Games (FFG) however were some real hidden gems. 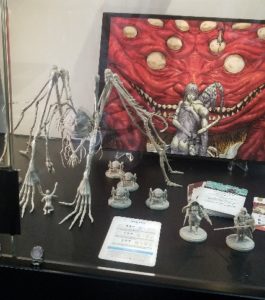 The clear stand out was a new board game from Kickstarter called Kingdom Death. My miniature died in the very first round of a demo we were viewing and I was instantly hooked. This game has a mature rating on it as a disclaimer. The pre-orders of this game sold out in the first day alone! It is so complex with the detail and theme behind every piece of the game, making the extremely high price point (300$ for a pre-order) seem worth it.

Not every game was developed for the hardcore gamer with a 252-page game manual. There was a family fun area where games were meant for quick and easy family fun for players as young as 2 years old! I know when my daughter gets a little older and I want to try and get her into board games like me, games like Mermaid Island and Bunny Bedtime. These games make cooperative play the focus. No one is a loser or trying to make someone else lose. We all play together and can have a great first board game experience! 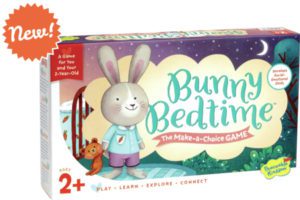 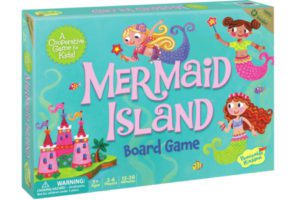 This leads me to the most amazing experience I had the entire convention, but to start, a little background info. 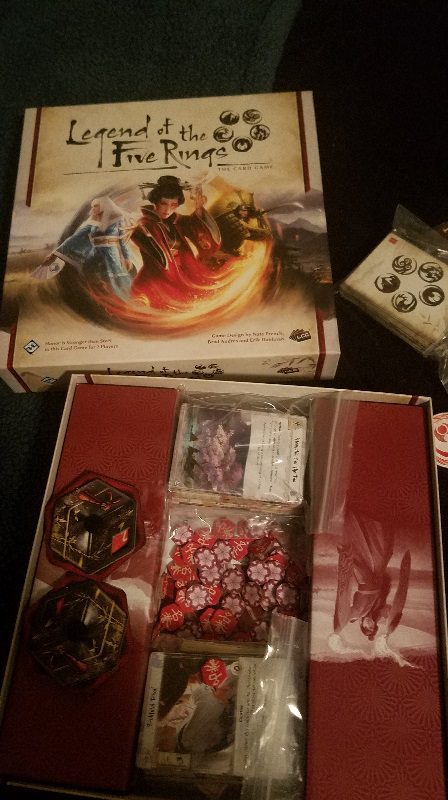 One of the main games I was determined to pick up while at the convention was the new Legend of the Five Rings (L5R) from FFG, a long honored and loved game about 7 major clans in a feudal Japan type setting. This game is considered a living card game, where the tournament held at the event would determine some additional roles in the game itself and would change based on who the top clans of the game are currently. This was such a key game to Gen Con 50 that to open up the convention tournament, a parade of 7 Samurai with their clan banners (Crab, Crane, Dragon, Lion, Phoenix, Scorpion, and Unicorn) were led by war drums down the main street outside the convention hall and into the tournament area. They only had so many copies of the game on hand to buy if you weren’t participating in the tournament, and by 3pm on the first day of the convention all the tickets to buy the game were gone. Let me tell you, I was upset! I was made even angrier at this when I found out that some people (who already had a copy they were playing with in the tournament) had gotten a hold of 2 tickets to buy the game later as well. It didn’t seem fair or just that people could reserve that many copies of the game on the first day of the convention no less. To add even more salt to my sour grapes wound, there were copies being sold on eBay for almost 3 times as much for a copy of the game that people didn’t even have yet, just a ticket to buy it.

A little self-bragging, one of my best friend’s brother is the Executive Game Designer for FFG who also happened to make up games for me and his brother almost 25 years ago (look where that lead him!). I was able to steal him away from his super busy schedule at the convention of doing his panels, interviews and the in-flight status report to personally guide me and a friend in a different direction since L5R was all out of tickets. Just hearing about the games he helped develop and which ones he was especially proud of was all we needed to try our hand at a new game to us; Star Wars Destiny.

Star Wars Destiny was a mixture of cards and dice to make an easy to learn and addicting game. This leads me to a fateful trek through the convention hall after one of the events I was Dungeon Master for, in order to purchase some booster packs for the Star Wars game. Imagine how many different booths of people trying to get you to sit down and play their game. The masses of people you are trying to navigate while people ahead of you stop dead in their tracks to look at something. At any time in this journey across the gaming hall, I could have been derailed before I got to the FFG booth. Now, this line the day before to just get into their booth to look at their items was an estimated 2 hours long on Thursday. Since being sold out of L5R, it took me 15 minutes of waiting before I got into the booth. Again, fate seemed to intervene as I had picked up a handful of boosters but my friend texted me to grab a bunch for him as well so I exited the checkout line and walked around again. It was at this time a hero of a gentleman in front of me was talking to a FFG employee wondering why he was given 2 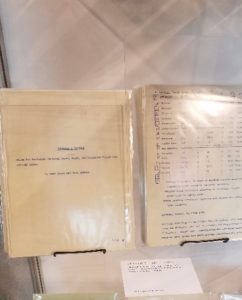 tickets for Legend of the 5 Rings when he only needed the one. Having seen nearly a dozen games on eBay of L5R, this guy could have sold his copy for 3 times the profit, he could have even sold it to me or anyone desperate enough for the game for whatever he wanted. Instead, as I asked him if I could please have the ticket, he just said sure and handed it to me. I was shocked, the FFG employee was shocked and the cashier was shocked. I reached over and bear hugged the guy. He literally made my convention.

Of course there were other great moments and sights during “The Greatest 4 Days in Gaming,” like seeing the original first printing of Gary Gygax’s D&D manual with hand written notes and other historical items located at approximately the 50-yard line in Lucas Oil Stadium, or hearing all the musical groups performing Final Fantasy music on flutes and other wind instruments, or even seeing a kid no older than 10 years old have the main video feed during an Overwatch tournament. I could go on about every single miniature game I NEED from the Batman game to the Alien Vs Predator game, or I could describe how impressive just some of the model pieces for miniature war gaming or even just hobbyists from the laser cut wooden models to the pre-painted Dwarven Forge tiles or even the 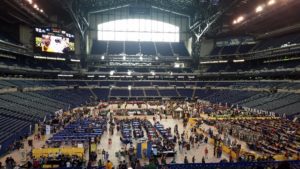 craftier molds to make your own pieces. And let’s not forget the Artist Alley where you could find fantastic art such as the Surrender of Meereen (Game of Thrones) by the talented Stephen Najarian to original artwork provided for Hearthstone or Magic the Gathering or even a scale blueprint of the original Nautilus from Jules Verne’s very own description.

Finally, to finish off the entire full experience of Gen Con whether it is spending hours gaming in your hotel room with the brand new games you purchased or experiencing the wonders of Georgia Street and the parking lot of Food Trucks and all of their amazing aromas and tastes, the “Greatest Four Days in
Gaming” extends beyond the established convention halls hours (10am-6pm most of the days) to the after hour events such as Pokémon meet ups, or sampling the local flavor of bars while wearing full leather armor. Gen Con was so much more than an individual experience. If they started pre-sale at the end of the convention for next year’s Gen Con 2018, it would no doubt have sold the majority of their tickets.