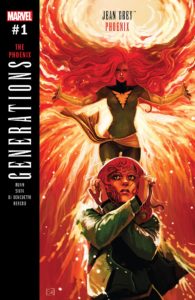 Written by: Cullen Bunn
Art by: R. B. Silva

This week’s issue of Marvel Generations is all about Jean Grey meeting Phoenix, and if that sentence confuses you, you’re not alone! Basically, the time-displaced Jean Grey (that currently features in X-Men: Blue) suddenly finds herself in the past when Phoenix was active as Jean Grey. Just like in Generations: Banner Hulk & Totally Awesome Hulk #1, we aren’t given any explanation as to how the time-displaced Jean got there, but the book moves past that rather quickly.

Once she arrives in this unfamiliar time, she is immediately drawn to Phoenix and spends most of the issue trying to figure out the purpose of their meeting. What starts out as a somewhat lighthearted encounter between Jean Grey and Phoenix turns into a fateful opportunity for the time-displaced Jean to alter the past, and potentially stop Phoenix from ever becoming Dark Phoenix. But Jean needs to decide whether changing this one event in the past is worth the potentially catastrophic consequences that could result.

Cullen Bunn does a fantastic job of showing core similarities in two very different versions of Jean Grey, but it does take a little while to get there. The time-displaced Jean initially wonders how she could ever become like Phoenix. Phoenix is confident, and Jean struggles with self-doubt. Phoenix is powerful beyond measure, and Jean is just beginning to learn new depths of her powers. But the longer she’s with Phoenix, she sees more and more of herself and begins to understand her in a new way.

While the story here is good, the best part of this book is R.B. Silva’s art. He does a phenomenal job at using visually capturing not just the events of the story, but the heart of the story. Phoenix and Jean Grey start out as clearly separate individuals visually: everything from their stature to their expressions is clearly different. As Jean begins to see herself in Phoenix, you can start to see more visual similarities as well, and by the final few pages, it’s no longer as easy to distinguish Phoenix from Jean Grey.