Gentle Jason in Red Hood and the Outlaws #7 Review 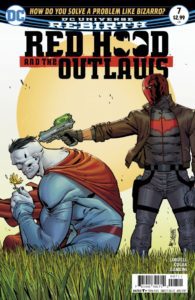 Sometimes readers need to be surprised. Sometimes that surprise comes in the form of a plot twist or character reveal. Sometimes it occurs when a writer takes an established character and adds a new layer of depth to their characterization. In Red Hood & the Outlaws, Scott Lobdell does exactly that. Lobdell takes an established character, Jason Todd, and moves him in a surprising direction to create a wonderfully compassionate read.

Jason Todd, the Red Hood, is often cocky, angry, violent, judgmental, and aggressive.  Through his characterizations as Robin, the villainous Red Hood, and the vigilante Red Hood, Jason Todd lived a hard life with little room for compassion. In this current iteration of Red Hood & the Outlaws, Lodbell has created a team where Jason takes on a new role - of a guiding, caring father figure and friend. After a strong initial story arc, Lobdell creates a situation where Jason and Artemis need to decide what to do with Bizarro. 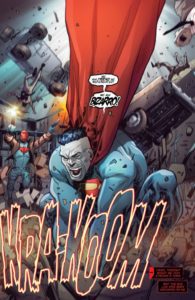 Lobdell and guest artist Mirko Colak cut between relevant scenes in Jason’s past and his current situation as he contemplates how to handle the unknown situations around Bizarro. Colak’s artwork is less detailed as Soy’s work although the change in tone fits well with this reflective issue. Colak’s action scenes have less kenetic energy than Soy’s work, but Colak captures the raw sense of power within Bizarro. Colak’s landscapes at the end of the issue fit perfectly with the sense of peace Lobdell established.

Red Hood & the Outlaws first story arc was a satisfying introduction to this team that is becoming referred to as the Dark Trinity. Issue #7 takes the characters and twists them in surprising ways and the series and the experience for readers is better because of it. Lobdell writes Jason in a way that surprises readers with a wonderful interaction between Jason and Bizarro. Jason, the killer, the pragmatist, finds a new role as caregiver and mentor to the developing Bizarro. This twist and development of Jason’s character makes this issue a joy to read for fans of these characters and for any reader intrigued by the front cover.

Jason Todd, the Red Hood, has rarely been compassionate. Writer Scott Lobdell surprises readers with the caring look into Todd’s character. This wonderful issue remains true to who Todd is while adding a new layer that many readers never considered. As a result, Jason Todd and the reader are left in a better place.