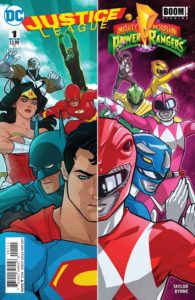 Boom Studios’ Mighty Morphin Power Rangers had a very strong 2016. The creative team brought readers through a series of twist and turns with a big reveal that shook the status quo. DC’s 2016 event, Rebirth, shook the status quo for the entire DC universe. Rebirth shifted dynamics within the Justice League and opened up new avenues for stories. Both universes finished 2016 with strong stories and serious plots. This new crossover presents itself as a fun and light adventure, but the tragic opening means readers are in for something heavier than the cartoon tone.

Writer Tom Taylor is no stranger to meaningful alternative universe stories. His writing on Injustice has earned him praise for both his varied depictions of traditional characters and for his ability to create dialogue and character relationships that carry weight. Readers familiar with Injustice looking for the darker tone of that series will be disappointed here as this first issue is all about traditional crossover setup. The Power Rangers team is thrown into the DC universe during an attack by a classic villain Lord Zedd. The colorful Power Rangers tumble onto the dark rooftops of Batman’s Gotham and in crossover tradition a fight ensues. Stephen Byrne’s art is colorful and appropriate for the cheerful world of the Power Rangers even when pulled into the shadows of Gotham. Bryne’s art captures a cartoon like essence that creates a juxtaposition with the tragic start to this title. Byrne’s art also works well to blend the light action and larger than life mechanical zords of the Power Rangers with the larger than life personalities of DC’s franchise characters. 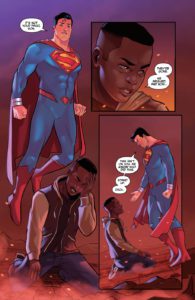 The story in this first issue works as a set up to this series and assumes that readers of the title are familiar with both teams. In classic Saban Power Rangers fashion, there are flashy fight scenes that take up more time than character development. But the issue is effective at invoking that Saban Power Ranger fun. Casual fans of either property expecting a quick, fun read will be satisfied. Fans who have grown used to the strong stories and serious plots of their individual series, will be left wanting more.

Taylor has a history with Injustice of taking thin properties and adding weight and significance to them. He may yet provide readers with a significant story as the series develops. But for now, just like the Mighty Morphin Power Rangers of the 1990’s, this first issue is flashy but not serious.