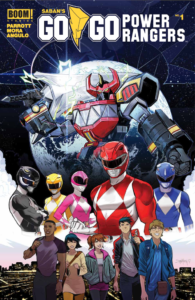 Seemingly taking place right after the first episode of Mighty Morphin Power Rangers, Go Go Power Rangers #1 is giving an early look at the Ranger’s career that’s being developed in BOOM! Studios’ ongoing MMPR series. Despite the majority of this issue being character introductions, it’s much needed. The ongoing MMPR title hasn’t really got deep into each character’s traits like this issue does. Jason is the loner dedicated to training. Zack is the outgoing, people person. Billy is the nerd who dislikes fish. Trini is an intelligent woman who is afraid of heights. Kimberly is the everyday girl who dislikes tongue depressors. A brand new character named Matthew Cook is also introduced who acts as Kimberly’s love interest. His character traits are explained as well so I anticipate he will become more important in later issues.

While this has some kick-butt Ranger action, this is more focused on building the characters and getting the readers well versed in them before we go further with the story. For those who are new to reading Power Rangers comics or even new to Power Rangers, this is a perfect issue to jump into. It’s so early on in their career that anyone can read this issue and know what’s going on. 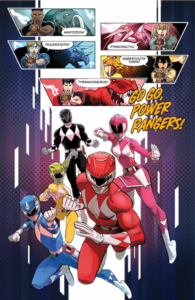 The attention to detail in this issue is astounding, in respects to the show. Parrott really knows the source material so well that I’d be surprised if he’s never seen every single episode. Billy and Trini’s fears (fish and heights respectively) are ripped straight from the show. Rita holding the two Nasada (Power Ranger’s version of NASA) astronauts is an awesome touch. In the first episode of Power Rangers, those two astronauts are the ones to accidentally free Rita from her space dumpster prison and we never see them again. However, in this issue, the Rangers go on a mission to save them. This comic is just one issue in and its attention to detail pays great respect to its source material and fans of the show.

The art is wonderful and easily the best part of the issue. Character designs look great and the Megazord fight, in the beginning, is beautiful. Mora’s art is a perfect fit for a Rangers title and I’m happy he’s on board.

Go Go Power Rangers #1 is a perfect Ranger comic. The character building and nods to the show are so respectful to the show while being its own entity since it’s not doing a straight adaptation of the show. I recommend this issue to veteran fans and newcomers alike.