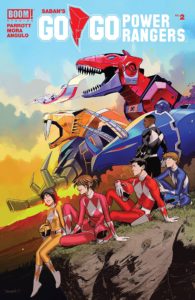 This comic is hard to talk about without comparing it to it’s source material, Mighty Morphin’ Power Rangers, especially if the reader grew up watching the original show like me. MMPR holds a special place in my heart and continues to be a beloved property I follow. When a piece of media comes out that is based on a property I love and it’s taken seriously and held with care, I instantly fall in love with it. That’s this comic, Go Go Power Rangers. It’s written and drawn with such love for the property and it’s fans that I don’t doubt this will be a highly successful title if it’s not already.

The other ongoing Power Rangers comic also published by BOOM! Studios is amazing, especially for it’s enriching story, new Rangers lore and awesome Megazord action. That title, however, is light on the character development and focus- that’s where Go Go comes in. Because Go Go takes place before the other Rangers comic, it’s easy for this comic to focus on the characters since they’ve just become Rangers and still getting to know each other and their powers. Growing up with these characters from the show and seeing their development here feels amazing. The show hardly ever focused on the characters as deep as this comic, so it is satisfying to get in each of the characters heads and emotions. 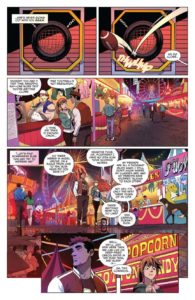 kes on the original property. This makes the stories feel fresh and not a straight adaptation. One example of this is the inclusion of a new character, Matt, who’s a non-Ranger friend of the regular group and boyfriend to Kimberly. What interests me is that he’s apart of this group where most of his friends are Power Rangers and they can’t tell him anything about it. If he finds out or something were to happen to him, it would create an interesting conflict between the two that I would love to read. The flashbacks to Kimberly and Matt’s early dating relationship is really cute and builds their relationship up to show that now they’re having problems. Kim can’t tell him that she’s a Ranger and now is distant from him at times. The foundation to this conflict is definitely here.

Of course we can’t forget about the good ol’ Power Rangers action that every good Ranger comic needs. The great fight scenes in this issue feels like I’m reading a new version of the show that’s been lifted right from the screen. Having the Ranger action mixed in with character development feels so natural and it’s a wonder why it hasn’t been done sooner. Even the art in Go Go is superb, from the characters, to the Rangers and Megazords. Being a diehard fan of Power Rangers, I get so excited when I see some of my favorite superheroes drawn perfectly.

Go Go Power Rangers #2 continues to prove that the Power Rangers we all know and love need character development and that it can be done with brilliant detail. The comic is only two issues in and is already easily one of my favorite titles of all time.