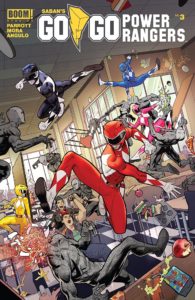 Go Go Power Rangers has had one of the best starts to a comic I’ve ever seen. It’s got character, humor, emotion and just plain old fun. It tells its own story while paying respect to the source material. I think Parrott knowing Power Rangers has helped this comic thrive since he dives deep into the characters we love but barely know. With issue #3 finally, here, let’s jump into it and see if it can keep that morphenomenal flow…

The issue starts out with two kids playing together that turn out to be Billy and Skull. I love that Parrott has written them as childhood friends (which the original show never hinted at being the case) as it creates this huge dynamic between the two characters since Skull is now one of the bullies that pick on everyone at school. Skull’s rough upbringing is hinted at why he became the bully he is now. The interaction between them suggests there was a fallout in their friendship and I can’t wait to find out what happened.

The issue shines as the characters interact with each other. I know I sa 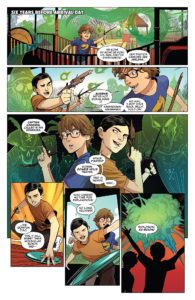 y this in each review of this book but it’s absolutely true, the characters are wonderful. This issue is hilarious with the comedic moments within the Rangers’ conversations and it feels so natural. You get the feeling that each of them have been friends for quite some time and that they’re comfortable with each other. Jason and Trini’s relationship continues to blossom as they keep up their Ranger training and it’s adorable. I get the feeling Trini is on a one-way street with her feelings for Jason but I hope his feelings are mutual when we get to that point in their relationship. Matt is starting to get the feeling he’s being left out of a secret everyone else is in on. At first, I didn’t think it would be a problem but the Rangers are making it weird with him. I feel bad for him- it’s upsetting that he can’t know especially when we know his hunch is correct. I feel a conflict with him and the group coming on and I dread the inevitable clash. Each of the characters has their own thing going on while being a group and this comic makes you love the time you’re spending with them while learning more about them. This book is only 3 issues in and the original show doesn’t have anything on it in terms of characterizations alone.

The villain here is interesting as well. We don’t know anything about her other than she’s Rita’s creation made to infiltrate Earth, learn about humans and find the Power Rangers. I hope that people enjoy the time we get with our heroes outside of being morphed since it’s the highlight of the book but I’m sure they’re looking for action, too. I’d say to those fans not to worry because I feel an epic battle coming on with this mysterious villain.

Go Go Power Rangers #3 continues to prove that it’s the best Ranger comic ever created. The character interactions are wonderful, the humor is hilarious and the art is fantastic. It’s easily one of my favorite comics right now and I highly recommend it to anyone.