‘Godzilla King Of The Monsters’: Trailer And Poster Show Off Monster Mayhem

A new poster and trailer for ‘Godzilla: King Of The Monsters’ have been released, teasing the end of the world. You can see them below. 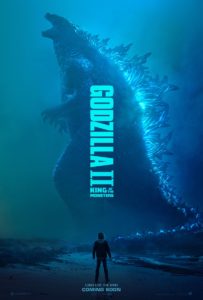 Members of the crypto-zoological agency Monarch face off against a battery of god-sized monsters, including the mighty Godzilla, who collides with Mothra, Rodan, and his ultimate nemesis, the three-headed King Ghidorah. When this ancient super-species-thought to be mere-myths rise again, they all vie for supremacy, leaving humanity’s very existence hanging in the balance.

The film stars Millie Bobbie Browm, Vera Farmiga, Kyle Chandler, and Charles Dance. Michael Doughtry is directing the pic, which will release on May 31st, 2019.

Have you seen this:
Russell Crowe Joins the Cast of 'Thor: Love And thunder'