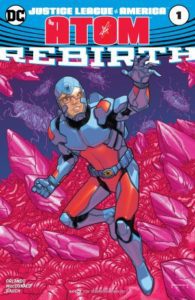 Sometimes being an invested comic reader is challenging. Continuity can be rewarding, but it can also be work for the reader. Threads of storylines, multiple versus of characters, even multiple universes all can stack up and create hard to penetrate books for new and casual comic fans. DC’s Rebirth event was designed to decrease this challenge and increase access to books and characters that readers have loved. Like many of the other Rebirth titles, Justice League of America: Atom Rebirth #1 successfully captures what has made the characters of Ray Palmer and Ryan Choi interesting and exciting.

Steve Orlando spends most of the issue developing the personality and relationship of Palmer and Choi, with the narrative focus on Choi’s perspective. Orlando quickly creates a character that readers can identify with and are invested in. Choi’s ability is at first held back by his quiet nature and lack of confidence, but he displays his heroic potential when Palmer is in need. This unassuming personality is thrust into action. Orlando writes Choi as someone readers can connect with and artist Andy MacDonald draws the world in a way that highlights the quiet demeanor of the character. MacDonald’s art creates characters that are mortal and human and colorist John Rauch’s washed out works helps mute the world. This combination creates a cohesive feel and tone between the characters and their world.

Readers who picked up DC’s Rebirth comic back in May 2016, know how the issue ends. The cliffhanger works from those five pages in May is all the more meaningful after reading this issue and investing in Palmer and Choi journey together. The dialogue and scenes are almost identical with only a few dialogue changes. One meaningful omission from May’s Rebirth is the added warning at the end when Palmer tells about someone Choi will meet. This exclusion could be intentional for the plot of this first arc or the exclusion could a result of the different scope of those two titles. Rebirth was a wide universe changing event. Atom Rebirth is a narrow personal tale.

The history around the Atom can be a challenge. Characters have died, come back to life, struggled, lost limbs, and embarked on a number of adventures together and alone. It is hard to say how Orlando will handle this challenge, or if he even will address it. DC’s Rebirth has focused on getting back to the core of characters, at times regardless of if things fit together. But this book fits together so well that new and old fans of the Atom will want to come back to see where this adventure goes.

Long time fans will be left with a lot of questions about Palmer and Choi’s history. New and casual fans will find an engaging and personal super hero tale. Orlando, MacDonald, and Rauch create a small, subtle world that is a good thing for any comic fan.