Roy Harper’s background is riddled with loss, but reconciliation seems to be on the horizon. After protesters of the “Black Artery” pipeline construction are attacked by a gang called the “Wild Dogs”, Arsenal and Green Arrow find themselves fighting together again, perhaps begrudgingly. Arsenal has family ties with the Indian Reservation under fire, and Green Arrow is on the scene to help Arsenal; with the hope of ultimately patching up their rocky relationship.

Roy is reluctant to work with his old mentor, but realizes he’ll need Oliver’s help to protect the Spokane Indian Reservation. As Roy recalls his past as Speedy, Green Arrow’s sidekick, we get a look at their troubled partnership and eventual fallout. Black Canary acts as the peace maker, and attempts to relate with Roy to help him see the need to move on from the past and work together for the greater good. Roy is left with the decision to either reconcile with Green Arrow or try to help the reservation on his own. 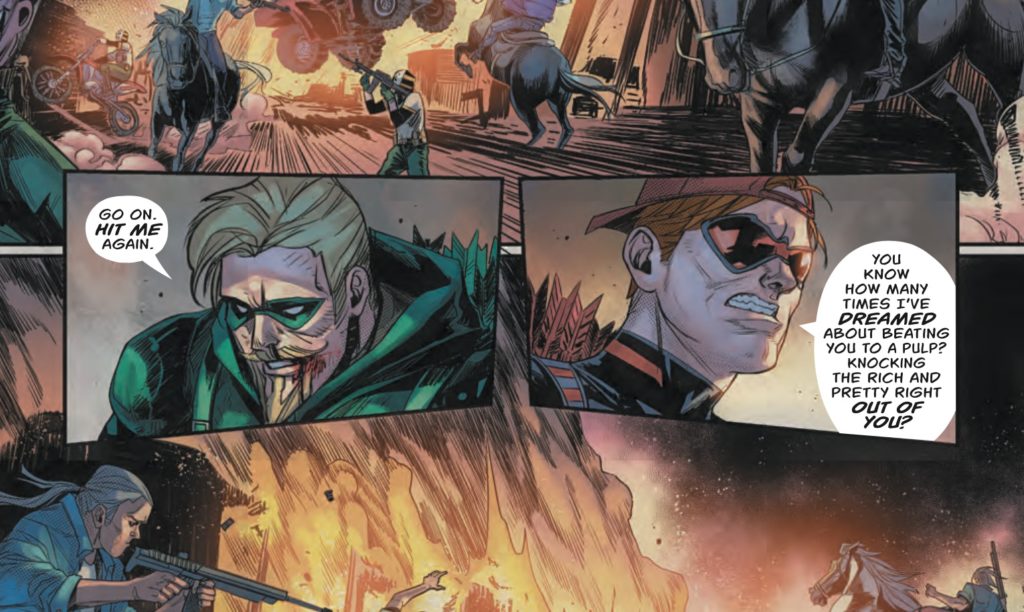 There is some very interesting backstory given to Roy Harper in this issue that puts his character in an entirely new light. Benjamin Percy does an excellent job of highlighting the way Roy and Oliver both complement and contrast each other. However, since their conflict is the main storytelling mechanism, it’s difficult to determine whether or not their friendship is worth salvaging. We aren’t given much reason to really root for Oliver and Roy to patch things up. Eleonora Carlini’s art makes the theme of pain throughout this issue feel very real. Whether it’s a scene of injured protesters and Native Americans, or a distraught Roy Harper succumbing to his heroine addiction; the tone created by the artwork is consistent with the written story.

The intriguing new insight into Roy Harper’s history carries this issue despite the un-compelling reconciliation story of Green Arrow and Arsenal.