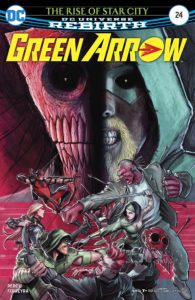 The conclusion to “The Rise of Star City” story arc is here with Green Arrow #24. This issue follows several plot lines: Green Arrow is going after Cyrus Broderick and the sinister Ninth Circle; Emi, Arsenal, and Black Canary take on the last two of the “Four Horsemen”, and Mayor Nathan Domini urges Seattle to rebuild after the destruction of the Space Needle. Needless to say, there’s a lot going on in this issue. The question is, does it all actually work?

Green Arrow knows Seattle is on the verge of falling apart, but before engaging in his mission, he stops to gently coerce some wealthy people to give their leftovers and some cash to the homeless people they were ignoring. This is a nice start to the issue, and it reminded me that Ollie is still the same old Ollie, despite all the chaos that he’s been going through these last few issues.

Oliver the heads out to the Ninth Circle chamber beneath Queen Industries, where he’s met by Cyrus and some Ninth Circle goons. Instead of a fight, Cyrus tries to bring Oliver into the Ninth Circle, in typical bad guy fashion. And in typical Ollie fashion, he responds by shooting an arrow at the mask on his head. Meanwhile, Emi, Arsenal, and Black Canary try to follow Oliver into Queen Industries but are halted by Cheshire and Brick. Of course, this results in a fight, which is actually one of my favorite parts of the issue. It’s awesome to see how all three of them work off of each other to take down this deadly duo.

Oliver and Cyrus keep quibbling, but Cyrus sees it’s not going anywhere and tells Ollie that their plan to have “a Queen at the center of the star” can still be successful if they can recruit Emi. That doesn’t sit well for Ollie, so he shoots a lantern above Cyrus as he’s about to escape, causing the oil and flames to fall and burn him alive. A pretty intense end for Mr. Broderick!

While all of this has been going on, Mayor Nathan Domini has taken his entire press conference to the Space Needle rubble to show them the holographic projection of what will be built in its place. This new building (or buildings) will separate the city’s identity as Seattle into something new: a “Star City.”

Oliver emerges from underground to see this projection light up the sky. And instead of rushing in to fight as Green Arrow, he takes off his costume and arrives as Oliver Queen. He announces he’s done hiding and is ready to take back his company, but this all falls on deaf ears since he’s thought to be dead by some, and a criminal by others. Instead of a triumphant return, “The Rise of Star City” concludes with the arrest of Oliver Queen.

The script in this issue is well-written, but the story is too jam-packed. There’s so much happening, and while it does all connect, it’s confusing to figure out. I read through this issue a few times and each time found some new important detail that I missed previously. It’s not the strongest example of Benjamin Percy’s writing, but it’s a solid conclusion to this arc nonetheless.

Juan Ferreyra’s art is amazing as usual. He does a great job at highlighting the humor of certain situations, like Oliver Queen shooting an arrow at Cyrus’ mask. It’s obvious by now that Ferreyra understands Green Arrow, and his chemistry with Percy brings a unique and appealing flavor to this book.

Green Arrow #24 concludes “The Rise of Star City” with a story that will change Oliver Queen’s life. It’s not the best issue in this title, but it proves that Benjamin Percy and Juan Ferreyra can make weaker issues seem stronger with their exceptional creative dynamic.