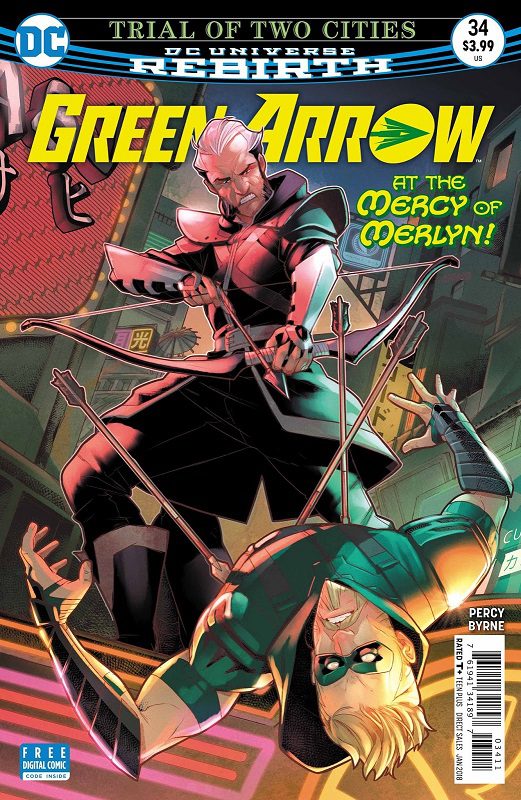 The issue opens up with a darkly lit flashback of Oliver Queen as a boy. He’s sitting on his father Robert’s lap. Robert reads his son the story of Robin of Locksley, the fabled archer Robin Hood. Robert is confronted by Moira, Oliver’s mother, who’s furious about a sexual affair Robert was allegedly having with a woman namedShadowo. Moira is upset about Robert not making their family the priority and for sleeping around her. The story moves to an underground lair, The Queen Family Tomb where Oliver is still in shock at the revelation that his mother is alive. She opens up to Oliver with the reason why he thought she was dead. She left because she was a mixed up in the affairs of the Ninth Circle and it was part of their initiation to leave. She has a proposal for him, but he quickly declines and Black Canary chimes in on his ear piece. The Clock King has been wreaking havoc with time in the city causing all sorts of time lapses.  A cutaway to Diggle stitching up Merlyn on a table. It’s dark and the two waxes about the time that Oliver slept with Diggle’s fiancée and that time that Merlyn saved Diggle from being beheaded by the terrorist cell known as Eclipse. One man turns on the other and the scene cuts away to the Poole Residence. The Ninth Circle have ousted Moira and want her dead. The aforementioned proposal was a mother-son team up to try to collect more evidence on the Ninth Circle in order to bring them down. On top of all this, Oliver Queen is on trial for murder charges. Will this team up work out? Who got the upper hand in the Diggle-Merlyn fight? Will Oliver be acquitted of murder? Will Oliver be able to trust his mother? 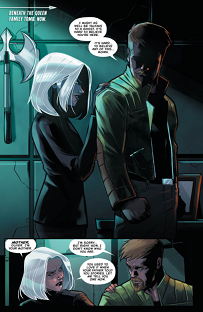 Benjamin Percy does it once again with an excellent story that furthers this adventure. I’m really starting to enjoy the Ninth Circle as an antagonist for Green Arrow. The writing is straight-laced except for a one-liner by Black Canary who uses an awful line to express what she is about to do concerning the train coming through the tunnel. The tone throughout is dark at times with just the right amount of mutual affection between Green Arrow and Black Canary. I really do not expect much more from Percy since this is quite a high bar he set. The art by Stephen Byrne is well-detailed, smooth, and captures the essence of Benjamin Percy’s writing. The art is slightly reminiscent of Juan Ferreyra or Otto Schmidt’s, probably more so with the latter. I hope that is a compliment if Byrne is reading this.

I really enjoyed Green Arrow #34. I went back and read issue 33 since I hadn’t previously read that one and it helps make more sense of this one. But that isn’t to say that if you picked this up never having read the previous issues you would be lost, because you wouldn’t. I enjoyed the brilliant art that went into the scenes where Oliver and Black Canary are making out. I always like seeing these two in love with each other. Only wish the cliffhanger punched me in the throat like other issues’ cliffhangers have done.