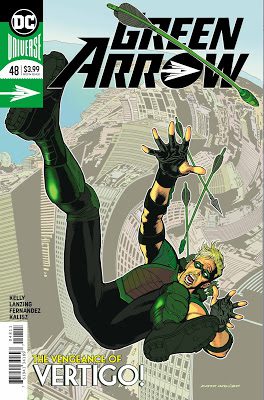 Oliver Queen can be one of the most annoying characters in the world, as was the case in Green Arrow #48. Don’t get me wrong, the guy has been through a lot, but who among these heroes and vigilantes hasn’t? Most of them are only human, so it’s understandable how things would wear on them, but Queen has the fortunate pleasure of dating a fellow hero. You’d think the shared experiences these two have had would make that type of conversation a reasonable one for Green Arrow and Black Canary to have.

It’s to the point that she’s calling Oliver Batman. (Though, that did lead to a pretty funny Batman impression that was well executed by Collin Kelly and Jackson Lanzing.) As much as Green Arrow may want to keep his emotions concealed, that’s just not who he is. Maybe he could get away with it with a stranger. Not his girlfriend and partner in crime-fighting though. Oliver is far more in touch with his emotions and how to deal with them than Bruce Wayne.

The fact Oliver’s emotions are that much of a focus makes Green Arrow #48 a bit of a slog. Green Arrow is certainly unique from other comics on multiple levels—which is a good thing—but this is a bit much. Hopefully, this doesn’t get to the point where Dinah can’t take anymore because this would become too much for anyone at some point. Never mind the fact that we’re talking about Black Canary. She puts up with absolutely zero BS.

In fact, you could argue she’s passed up Oliver as the best character in the series. The way she saved Oliver from Citizen was quite impressive—and very cool—and seeing her catch Green Arrow is always a sight.