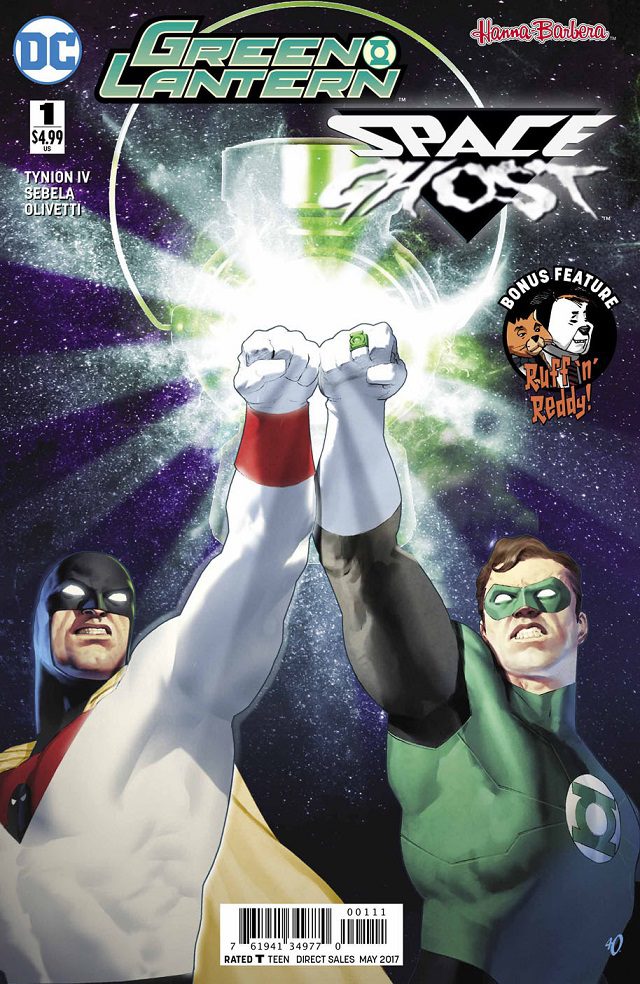 Written by: James Tynion IV and Christopher Sebela
Art and Colors by: Ariel Olivetti
Letters by: A Larger World Studios

On a distant planet, its people call for help. Breaking through a dimensional barrier, that call is being answered by Hal Jordan, The Green Lantern. With Salaak guiding him, Jordan comes face to face with Larfleeze. As Jordan prepares to press the attack, Larfleeze is knocked unconscious by an unseen entity. One who seems to view Jordan as a threat as well. As both Jordan and the entity feel each other out, the forces of Zorak enter the area and attack. The hidden entity reveals himself as Space Ghost, who quickly goes after both Larfleeze and Jordan as the latter finished taking out the remaining Zorak forces. While both heroes continue to fight each other, they invariably crash land onto a nearby planet.

As Hal awakens, he is confronted by the forces of the planet Perterra, who do not like outsiders, especially ones from space. As they attempt to take out Hal, he is concerned that they have a lot of firepower for people who don’t want anyone to know about the universe. As he tracks the energy signature of the weapon that drew Larfleeze to the planet in the first place, Space Ghost attacks again. As he gets the upper hand, he’s confronted by a young girl and her pet robot. This gives Hal enough time to knock out the Peacekeeper before passing out 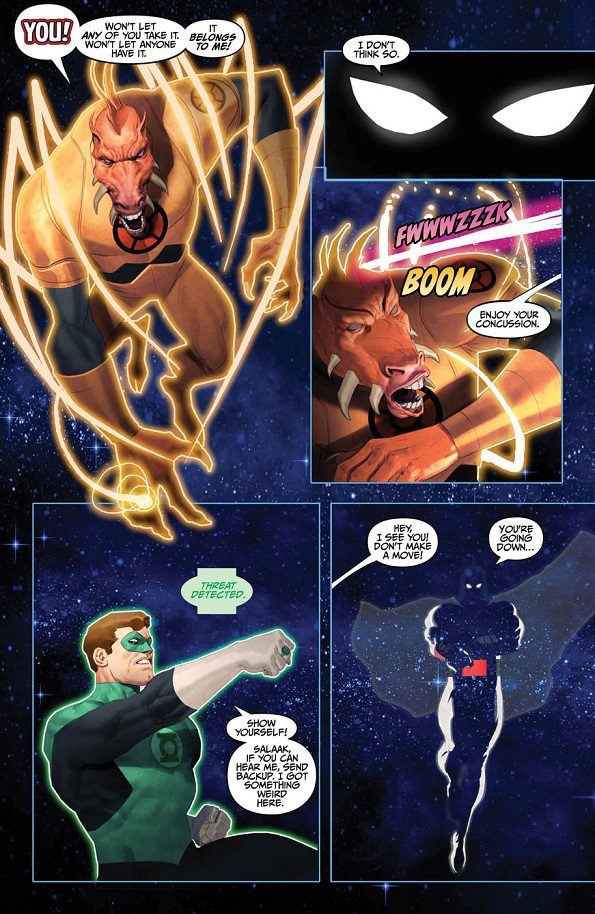 himself. When they awake, they discover that the young girl and everyone on the planet have been conditioned to think that they are alone in the universe and that anyone who does not conform to that idea is a threat.

Both heroes confront the girls uncle, who sent the original message. It turns out that he isn’t looking for someone to help him destroy a weapon, but to fix a ship so that he can leave the planet and explore. As the inventor finishes his explanation, the forces that confronted Hal in the forest catch up with them and both Hal and Space Ghost combine their strength to take them on, but at a cost. The heroes return the girl to her home and reveal to the planets populace that there is life beyond the stars. Both Hal Jordan and Space Ghost leave after coming to an understanding, but not knowing the ripple effect that their presence would have on the lives of the people Perterra and what impact their presence would leave behind.

This story works well overall. The plot is engaging and takes it time to unravel without being repetitive or boring. Tynion IV and Sebela understand the characters and both are given their due diligence in this seemingly stand-alone story. There are moments when you can’t conceive of these two characters working together on the page, but they do beyond their personas as Space Cops. Space Ghost and his dialogue can be a little clunky at times, but it works well for the dynamic between the two of them. Ariel Olivetti’s artwork is gorgeous. All of the fine details work with the color palate and all of the art has a beautiful painted tone that brings the characters into the forefront of the panel without losing the background artwork. Would actually like to see more from this team and this story.