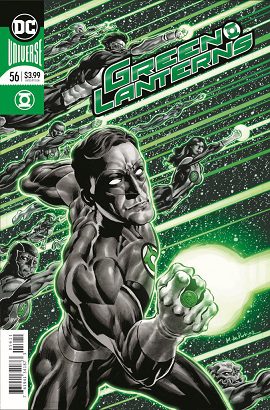 Hank Henshaw is triumphant. He and Eon have captured the entire Green Lantern Corps as well as the sentient planet Mogo that he is going to turn over to the Ravagers. He has control over the central power battery and all of the rings. He has possession of the Phantom Ring and control over the entire spectrum.

With Henshaw distracted, Simon Baz makes his way back to the planet and manages to revive John Stewart. The two of them manage to free the rest of the corps and an epic battle ensues. As the battle rages and Henshaw confronts Hal Jordan, he reveals what he is going to do with all of this new found power that he has amassed; something he’s already done before!

Despite the total retread of another story, this issue was fun to read. Jurgens added some dramatic tension to this story and even managed to instill a little doubt in whether or not the Corps could overcome all these obstacles it is facing. Then it falls apart in the end with Henshaw deciding to use his power to get revenge on Hal by doing something he’s done in the past. One would think that because Superman was the one who trapped him, it would be Superman that CYBORG SUPERMAN would go after, but no. Instead, we get a retread of a much better story.

Perkins’ art is amazing in this issue and the art goes a long way toward holding my interest and adding to my enjoyment of this issue.