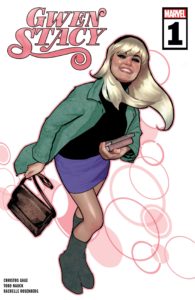 Obviously I don’t know much about Gwen Stacy. Why? Because my first reaction to a solo comic about her was… “why?” I know in another universe/timeline she becomes Spider-Gwen, but not here. So… what’s this all about?

Prequel time. Prequels are everywhere, so it’s time Gwen got one too, right? Before college and meeting Peter Parker, she was a Senior in High School with her best friend, Harry Osborne. She is also one heck of a detective - I guess having a father part of the police department surely helped, no? Even surpassing her father in some regards! 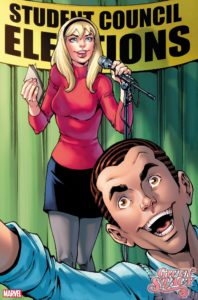 I see why we needed a prequel all about Gwen. She’s smart, she can protect herself, and is so much more than just “Peter Parker’s girlfriend.”

The art and colors are great! Certainly of the modern flare but with more style, in my opinion. It’s not all sleek lines, but it works. It’s modern, sure, but it has a hint of the old style of comic art, which was certainly welcoming.

Have you seen this:
Change My Mind #106: MCU Rewatch Vault — Avengers: Age of Ultron

I have to say one thing though. I’m a big Doctor Who fan so I see connections where there shouldn’t be one, and, well… Gwen’s father… reminds me an awful lot of the Twelfth Doctor. All floof and eyebrows.

Seeing the plight that Gwen Stacy is going through pre- Parker timeline makes me want to read more of her story. I see a strong female role-model brewing in this comic, and I want to see her story fleshed out more.