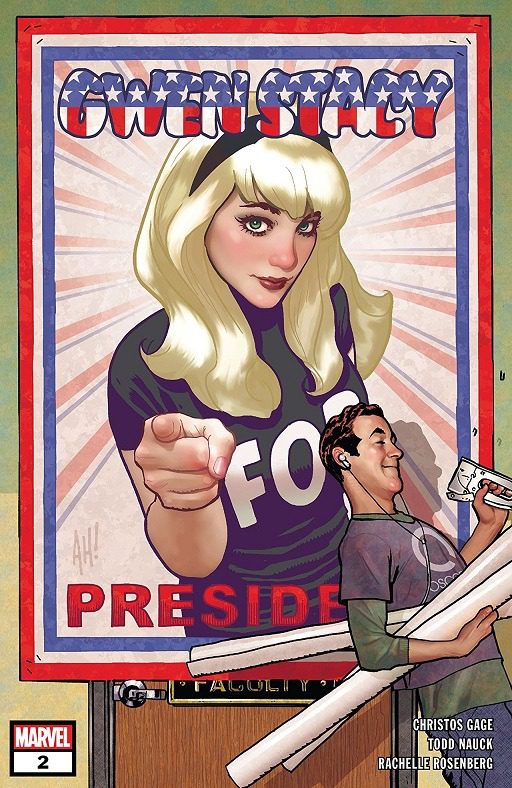 From where we left off, Gwen’s father was critically hurt and left hospitalized, and ow Gwen has taken it upon herself to see who would do such a thing, and simultaneously frame her father for shooting someone during the struggle. Being quite a detective herself, she uses high-tech programming created by Os-Corp, but something still doesn’t add up… and what does the Green Goblin have to do with all this? That, my friends… isn’t covered in this issue, BUT there are more issues to come (three more, actually, so we have time!).

I’m so glad this is pre-Peter Parker. It really let’s Gwen Stacy shine, and also let’s us know Harry Osborne a bit better. He was a nice kid before he got messed up and tangled in with Spider-Man. These kids are pretty good eggs, and it’s refreshing to read about a female character who is actually revered by her friends for her intelligence (something young girls could easily look up to). I have a feeling we are going to learn a bit more about the Green Goblin, and how he came to be (or returned for that matter). This is the early days, and it’s exciting!

Story continues to be well written, as it humanized nearly everyone involved (even the criminals). No one is pushed aside like a throw-away character or sterotypicalized (not a word, I know, but it’s needed). Everyone feels like they have a role to play, and I would be devastated if anything happened to them (well, Gwen’s father was already shot, but besides that).

The art continues to be unique, and the coloring continues to enhance the story, rather than it being the story. While the lines and details match some of the modern art styles, it still stands out as something different (in a good way, I promise!). The story is just getting interesting with the introduction of a new villain.

In a time where binge-watching is the norm, we must wait for the next issue to be released, I’m sorry folks, but there’s plenty of Gwen out there to read in the meanwhile!