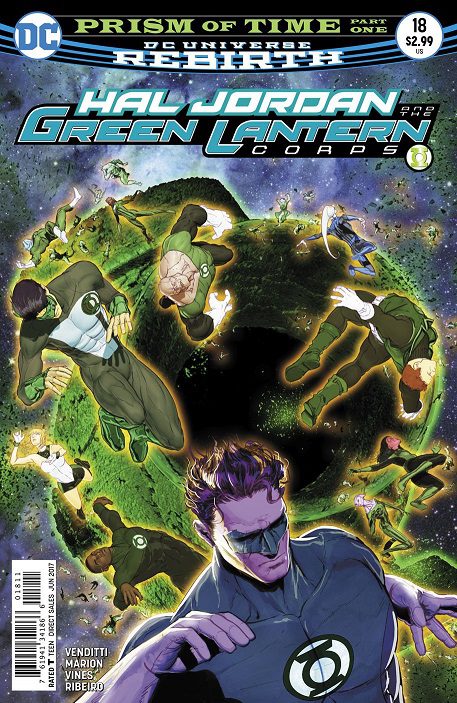 The tentative partnerships between the Green and Yellow Corps are put to the test in this issue as Gorin-Sunn and Space Ape travel to space sector 563 to check out a potential temporal anomaly. When they discover a vein of strange ore traveling through a distant mountain, they go to investigate and are attacked by strange creatures made out of pure will. As the Green Lantern Corps watches the Sinestro Corps construct their own power battery on the living Lantern Mogo, Corp Leader John Stewart decides to confront Hal Jordan and Kyle Rayner with a history lesson in cooperation. A lesson that seems good in theory, but harder in practice as both sides start fighting and it takes the two toughest lanterns on both sides to end the conflict. 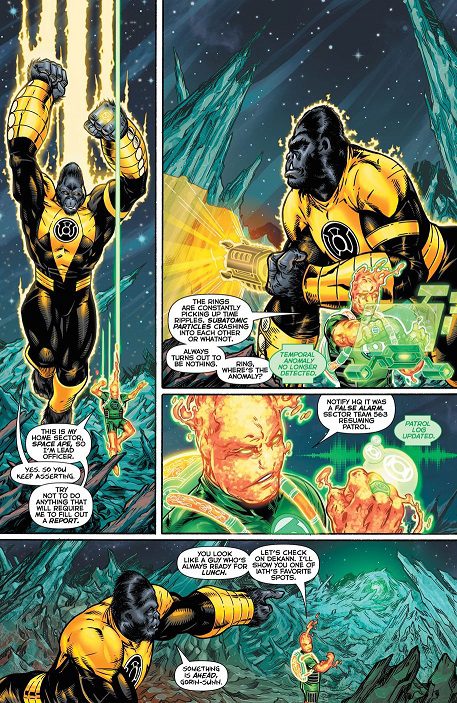 With a renewed sense of cooperation, both sides chip in to help complete the Sinestro Corps power battery while Ganthet and Sayd look on. They have determined that the best way to bring hope back to the galaxy is to task Saint Walker to go forth and find hope where he can because something is coming. When the missing lanterns do not check in, Stewart dispatches Hal and Kyle to track them down, but before they can leave, a temporal anomaly opens up in the surveillance room. A familiar face emerges with a dire warning for the corps before collapsing into unconsciousness.

I continue to enjoy this series and I like how each issue builds on the momentum of the previous one. There are consequences that are being worked on the page between the characters and their interactions with each other seem genuine, giving the reader a sense of both history and personality. Venditti does a good job of ramping up the growing tension between these two sets of tenuous allies in a way that doesn’t seem cliché or inconsequential. The character interactions are enhanced by Marion’s art, which works well in conveying the power of the ring-bearers and the action that surrounds them.