It looks like John Stewart’s grand experiment to combine the Green and Yellow corps is about to face its first major test and the results of which could be potentially disastrous to the future or both forces. As Rip Hunter recovers in the infirmary, being treated by Soranik, Hal tries to determine why the man has a Green Lantern ring on his finger. After unsuccessfully trying to remove it, John has to step in and have it removed safely. As the Time Master wakes up, he recounts to Hal, John and Kyle how the timeline has been corrupted and there are no more Green Lanterns in the future. The men find it hard to believe, but they might not have much time because according to Rip, they only have one day to prevent the disaster that removes them from history. 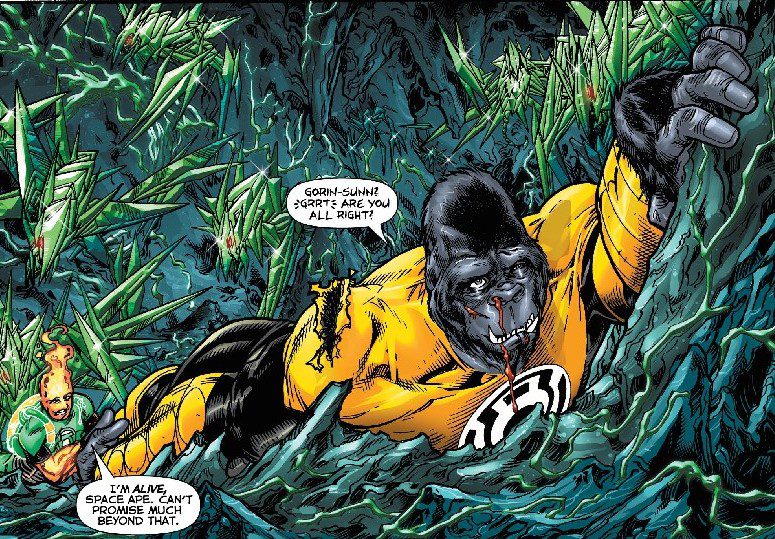 In Space Sector 563, Gorin Sunn and Space Ape have survived their ordeal and are trying to find a way to communicate with the rest of the Corps. Their combined efforts are derided by the presence of a man calling himself Sarko. It seems Sarko is in control of the beasts that attacked the two of them and he tells him that their working together is what brought him from the future. It seems that the unification of both teams is something that he doesn’t advocate and he has decided to end the truce before it has a chance to truly begin. As John decides to trust in Rip Hunter and put both corps on alert, Kyle takes his time to try and reconnect with a seemingly unwilling Soranik. The scene is cute, but a little forced. To the point where Kyle seems desperate.

As the Prism beasts approach Mogo, the Lanterns move in to protect the planet and push back the invaders. Unfortunately, their efforts are unsuccessful,

leaving the issue with a satisfying cliffhanger ending.

This issue works really well as not only a continuation of the first part of this arc, but as an effective means of recalling to readers the dynamics of each member of the core groups of characters. There are some really good moments Robert Venditti has written for Hal and John. Unfortunately, the Kyle/Soranik scene was a little desperate to me. The art by V Ken Marion is well done as well and conveys the fluidity and motion that one would suspect from characters who spend most of their time in space.