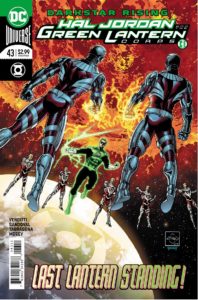 All over the galaxy, the Darkstars are making their presence felt. As they move from planet to planet, dispatching their brand of lethal justice on criminals, the corps is tracking their movements. John Stewart decides that now is the time to take the Guardians the information that they have and wait to see what they decide to do next. After getting the answer that he wants, Stewart and the rest of the corps go after the Darkstars, tracking them to their base only to be ambushed with Hal Jordan finding himself face to face with an old friend with a new purpose. 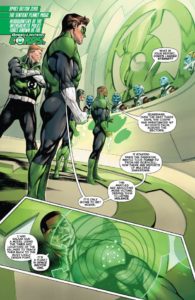 What makes this story work is that the Corps is dealing with the limitations of both their mandate and their reach. They can only react and their reactions are interesting to read. Venditti does a great job of showing the aftermath of the Darkstars acts. It shows the scale and reach of the Darkstars. I really enjoyed the interaction between Hal and Tomar-Tu. Their back and forth work to show the differences in both groups approach to crime and you can tell in the narrative that it’s going to take more than brute force and will on the part of the corps to stop the Darkstars, especially in the wake of their growing numbers.

Venditti weaves a complex story in this issue and all of the things that are not shown give the story itself more resonance. The things that Tomar says could easily be rendered, but Sandoval does a great job of holding back visually, while still giving some great art. One of the most striking things about the art is how Tomar is drawn. The way the shadows fall across his face so there are moments that you can’t see all of him add both subtle menace and tragedy to the character. It doesn’t look like this story is going to be resolved easily and the complications add to the story well.