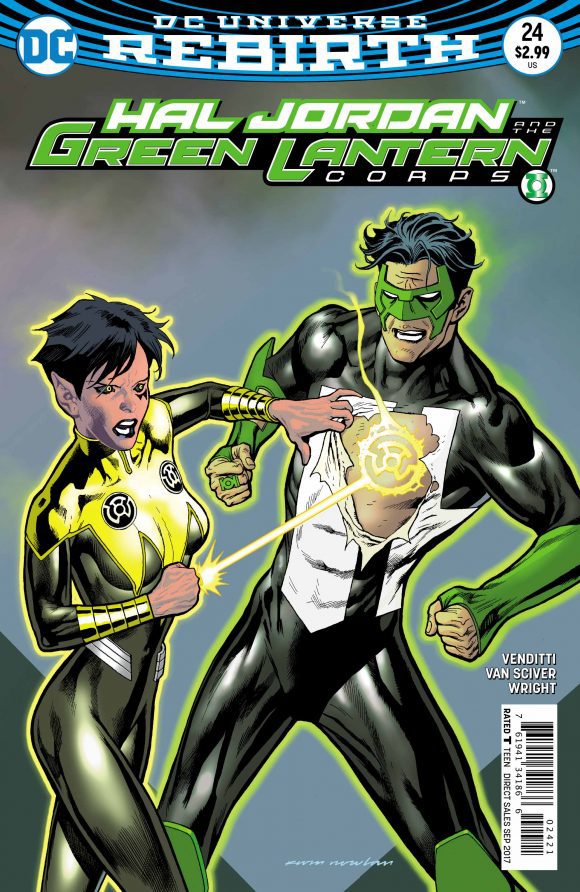 The issue begins with a flashback to Tomar-Tu confronting Yellow Lantern Romat-Ru with the proposal from the Soranik and the Green Lantern Corps to work together. As Romat goads Tomar, the anger in the Green Lantern begins to build causing him to make a decision that could destroy the fragile peace between both factions. His decision is argued with his partner, who warns him that what he did will weigh on him in ways that he doesn’t know yet. As both Lanterns leave the scene, they failed to notice that they’ve been being recorded the entire time.

In the present, Hal confronts Tomar, who has been unable to find any peace since that fateful day. John Stewart demands Tomar turn over his ring even as Hal defends the Xudarian’s actions based on Romat’s history as a serial killer of children. John tells Hal the reasons behind his decision and Hal continues to stand at odds. Tomar, to his credit, hands over his ring. Meanwhile, an enraged Sora speeds across Mogo to confront Kyle Rayner. He believes that she is there to discuss his proposal that she rejoin the corps. She doesn’t give him the answer he wanted. I continue to like the dynamic between Soranik and Kyle and the twists that their relationship is taking make for compelling drama. 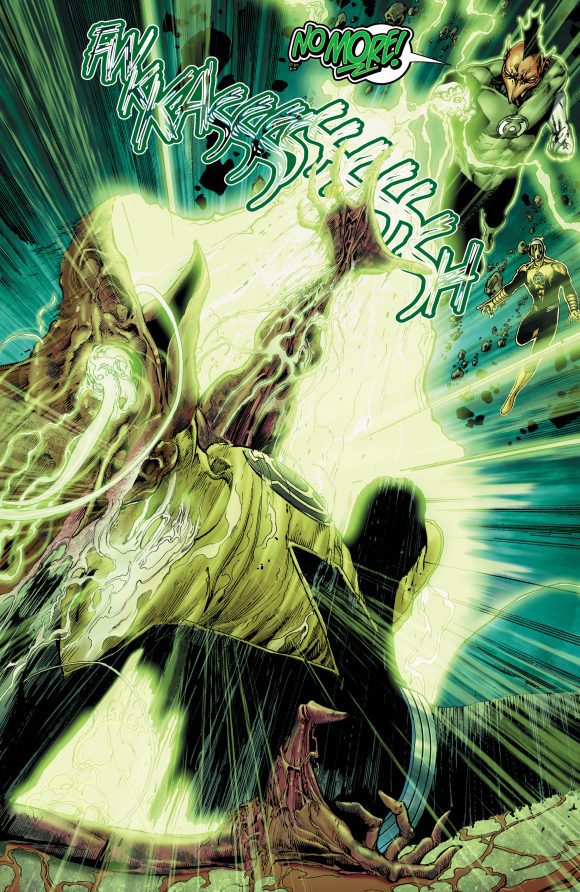 John confronts Bolphunga in the Science Cells and lets the pirate leader know that he has all the evidence and all of his men in custody, leaving Bolphunga with no leverage. Kyle tries to explain his actions to Sora, but her rage at what she knows, what Kyle kept from her and what she had to do in order to find out the truth cause her to violently lash out at him. Tensions come to a head when John addresses the entire universe, causing the Yellow Lanterns to come after Tomar for vengeance.

The tension that has been building in this storyline is amazing. I continue to be impressed with how Venditti has thread all of these stories together and kept the tension at this level. All of the personality conflicts and relationship dynamics have come to a head in this issue and it will be quite a task to satisfactorily solve these competing crises. Ethan Van Sciver’s artwork is amazing in this issue. Not only is he able to project the power of the corps along with brilliant backgrounds, but the scenes between Sora and Kyle are stunning to look at. Sora’s rage is rendered so well that you feel it along with her. This is a great issue.