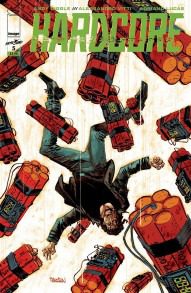 Hardcore #5 is the finale to what’s been a non-stop thrill ride. Endings are never easy, but Andy Diggle did a good job with this.

Now, I haven’t seen any announcement of a sixth issue, so Image and Skybound may be waiting to pull the trigger on continuing the series, which put Diggle in an odd spot. Had this been a five-issue mini-series, he could’ve ended this differently; instead, he left it open for the story to continue.

Agent Drake, who’s still piloting Col. Esteban Montenegro’s body, has made it back to the Hardcore Program facility where Markus and his henchmen are waiting, including Bonnie Pierce. In the course of their back-and-forth, we get a ton of action, which ultimately leads to Pierce’s death. Only, it’s at the hands of Markus, who planned to kill all his cronies in the end.

The most satisfying part of Hardcore #5 has to be Drake pulverizing Markus before freeing himself from Montenegro’s body. Alessandro Vitti and Adriano Lucas provide such a raw, ruthless beating that fit in perfectly with the rest of the violence we’ve witnessed throughout the story.

Again, Diggle provides an open ending to the story. Not only can there be more Hardcore Program stories, both Drake and Markus survived the final altercation. There’s a chance now for two Hardcore Program to be developed — if the government still has Markus’ blueprints and the series’ villain creates a new one for himself.