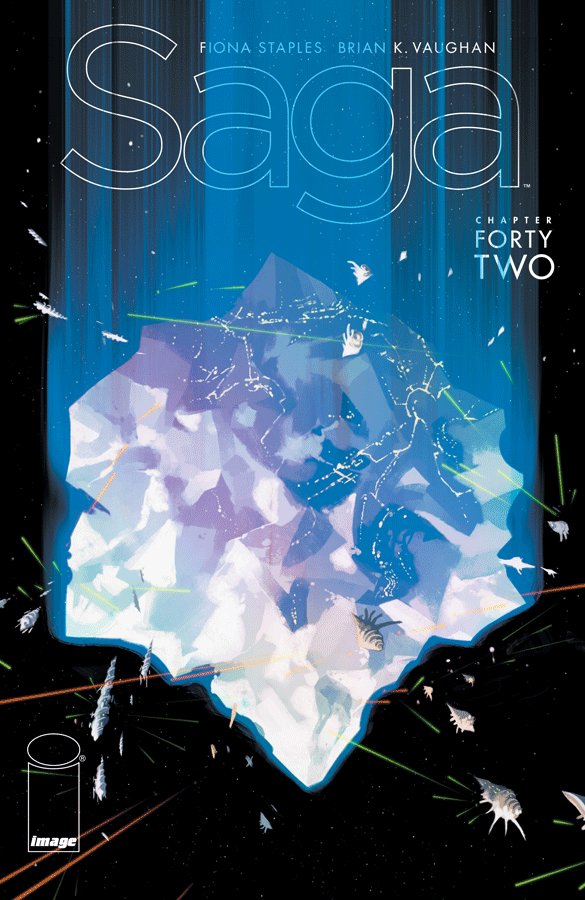 Sad. That’s the word I’d use to describe this issue. From the initial pages, Brian K. Vaughan’s story tugs on your heartstrings and makes the reader feel for each character. Sometimes it’s a different kind of sadness. Sometimes it’s related to feeling sorry for a character or empathizing with what the character is going through. Regardless, with his brilliant storytelling, Vaughan knows exactly how to draw out readers’ emotions by weaving in the element of surprise. Throughout Saga, I’m constantly shocked as the story takes unexpected turns—and as we see in the conclusion to this arc, sometimes they’re a turn for the worst.

As Vaughan has shown throughout forty-two issues, he knows how to write an incredible story. He’s able to provide just enough mystery to allow readers to wonder without losing their interest. This mystery that threads itself throughout the comic leaves readers asking questions and keeps them coming back every month, yearning for their questions to be answered. In this issue, the golden cube that Gwendolyn gave to Landfall makes another appearance. Here, it’s referred to as a “payload” and releases a bright light, reminiscent of a serpent, that heads 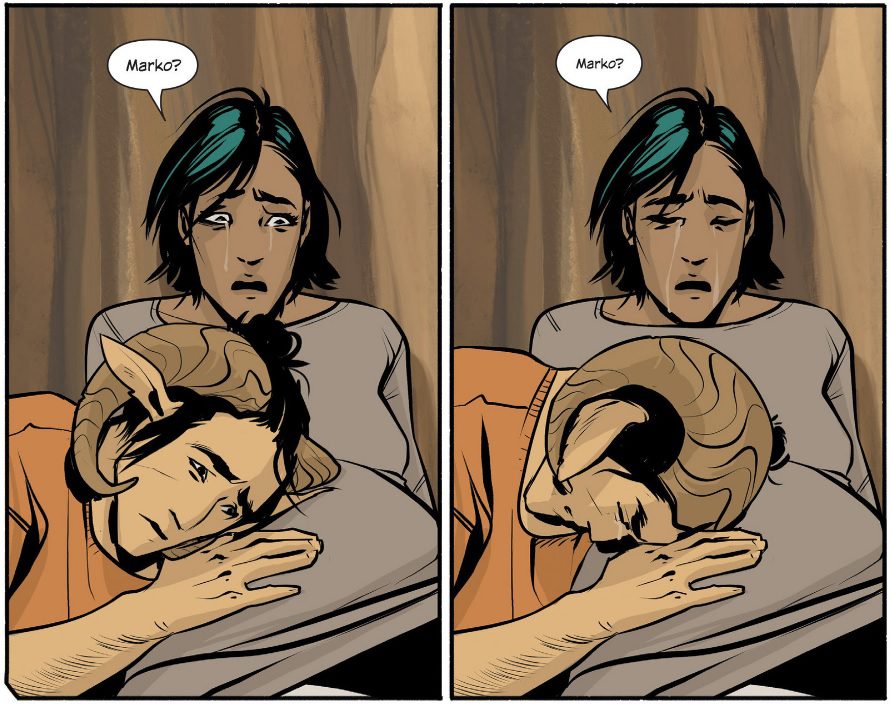 straight for Phang. Right before, the HMS Observer tries to contact Phang Central to inform them that they will pass safely through the Timesuck. However, as the story shows, our characters do not come out unscathed. We lose Jabarah and the rest of the meerkat gang. Kurti’s death is one of the most heart-wrenching ones I’ve experienced in Saga with him exclaiming, “Help! Somebody help me! Please God! I . . . I believe!” as he desperately reaches for someone to help him. In perhaps the saddest moment in Saga to date, Hazel says, “You know that old cliché about millions of deaths being a statistic while the loss of just one is a tragedy? If that’s true, what is it when you lose someone that never even has a chance to be born?” She’s referring to her baby brother. As Phang passes through the Timesuck, Alana smacks against the wall of their ship and loses the baby. She can no longer feel him kicking, and Marko can no longer hear his heartbeat. If Phang originally was on a smooth course through the Timesuck, how much of what happened is due to the “payload”? How responsible is Gwendolyn? Was this really for the good of Wreath?

And the sadness doesn’t stop there. We also see an unknown new character shoot the Will and Sweet Boy. Dressed in very formal-looking garb with a feathered cloak, this new character is almost reminiscent of a robot. However, his face isn’t like what we’ve seen. It has a blue, almost metallic, tinge and is the shape of a ten-sided die. “Hi there,” he says while shooting the duo. “We don’t know each other, but you murdered someone I love . . .” The Will is struck in the gut, while Sweet Boy is shot in the head—with no chance for survival. 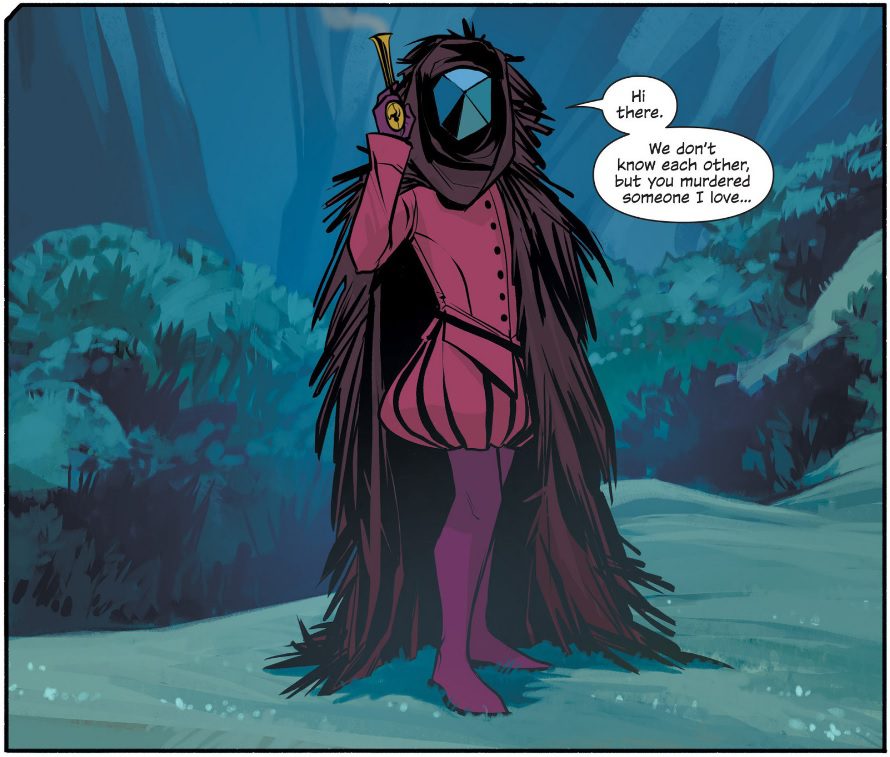 Fiona Staples’s artwork guides readers through the horrible, yet masterful, pages of Vaughan’s story. She takes our hand and leads us page to page, providing a sense of comfort in her signature style. While Vaughan’s storytelling takes us to places unexpected—and sometimes to places we don’t want to go—Staples makes us feel secure. Even when introducing surprising, creative new characters or locations, there’s consistency in her thick, black line work with bright colors in the foreground and more muted colors in the background. Staples artwork is a perfect complement to Vaughan’s words. She makes Vaughan’s words comes to life and evokes each character’s emotion—anger, fear, love, sadness—in all of us. I love how she’s depicted the new character who shot the Will and Sweet Boy. The detail she put into his appearance—from his clothing, stance, and demeanor—tells its own story, and I’m excited to learn more. The strongest, and most moving pages for me this issue are the last ones in the issue. The decision to end the issue with seven black pages—rid of any artwork—is incredibly telling. Before this, Hazel, who has many wonderful things to say this issue, says, “I’ve had a lot of relationships in my time, platonic or otherwise, but the ones I think about the most are those that never quite made it to term. The dashing first date who didn’t call you back. The lady on the train you had that amazing conversation with but you never saw again. The cool neighbor kid you met the first time a week before he moved away. I guess I’m just haunted by all that potential energy. One moment, the universe presents you with this amazing opportunity for new possibilities and then . . .” The issue ends on this note, leaving the story up to the reader’s interpretation until the next arc. Does it mean nothingness? Although some readers may be put off by having seven fewer pages, I think this is a masterful way to represent the story and to end this arc. It’s almost like a moment of silence for all those we lost.

Staples’s cover shows Phang up close, which is quite beautiful with its icy hues of green, purple, and blue. It looks to be moving quickly through the black of space, as a comet would. There also seem to be seashells exploding from it, an interesting choice upon Staples’s part, as comets usually release gas or dust particles. Perhaps the seashells represent those fleeing Phang to escape the Timesuck, similar to Marko, Alana, and Hazel’s ship being a massive tree.

Vaughan’s story doesn’t disappoint, no matter how sad it is. He offers a compelling end to the arc. I’m interested to see what happens next with our characters. I hope to learn some more details in the War for Phang, and Gwendolyn’s true role in it, to see how done the war truly is. Vaughan and Staples continue to craft a perfect comic that keeps readers craving more.