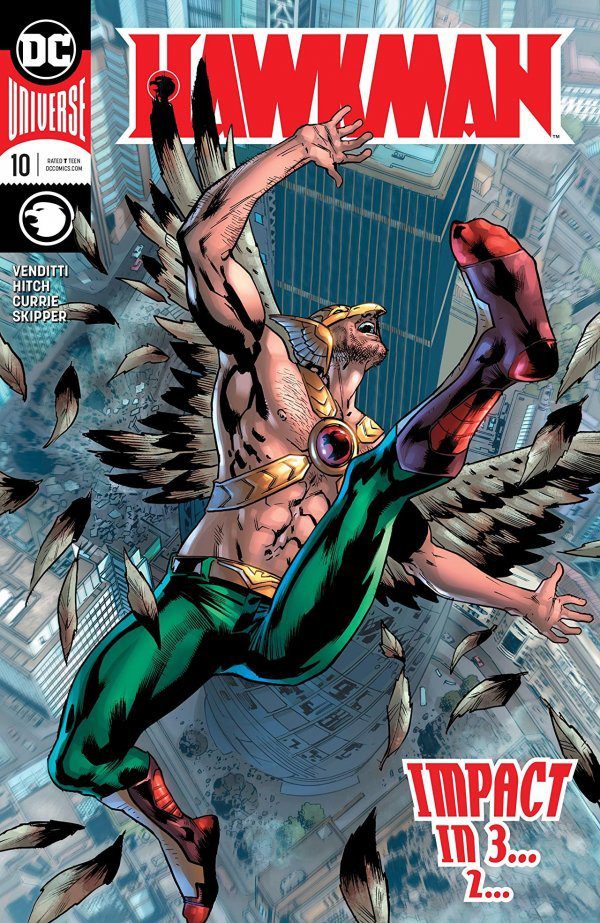 Written by: Robert Venditti
Art by: Bryan Hitch
Inks by: Andrew Currie and Hitch
Colors by: Jeremiah Skipper
Letters by: Starkings and Comicraft

Idamm has unleashed his forces on London and his army of Deathbringers are flooding the skies, taking people off the street. Carter’s former friend is preparing for his final revenge against Hawkman and he wants him to witness the death that he is about to rain down on the city.

With everything looking grim, Carter continues to fight back. He takes the fight to Idamm and shows the man that he’s not alone. Xanadu joins the fight, giving Carter enough time to reclaim his mace and take to the skies to rescue as many people as he can. He takes on the Deathbringers, but there are too many of them. With Carter being overwhelmed by their forces as well as fighting to stay in this time and place, Hawkman discovers that the only thing that can stem the tide might be for him to embrace all of his past lives and create the ultimate army of one.

This is an incredibly interesting and fun issue. Robert Venditti brings the action, adventure, and thrills to this story and the pace is well done. The story was engaging from start to finish and the dialogue confirms what is interesting and fun about the character.

The art by Bryan Hitch is dramatic and dynamic. I loved all of the action scenes and how they complement the plot. Can’t wait to see what happens next.