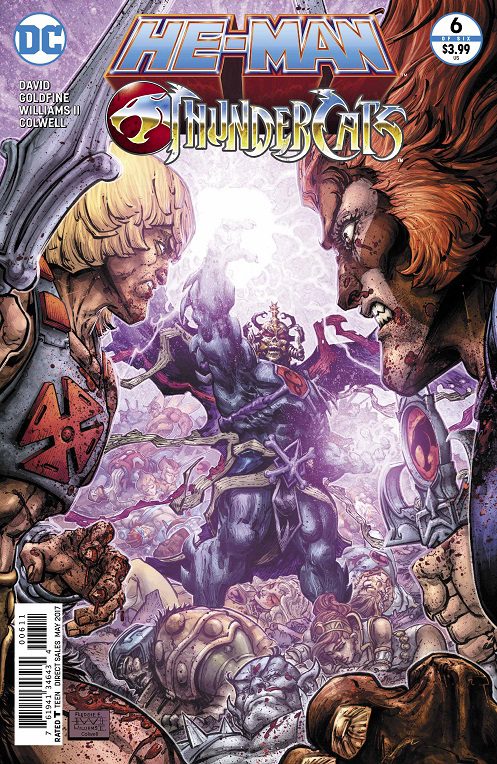 How did an action figure tie-in cartoon end in the 1980’s? Would the villain bumble the evil plan? Would the individualistic villain be defeated by heroes working together? Would the heroes realize that the power was within them the whole time? Writers Rob David and Lloyd Goldfine utilize all three cliche resolutions in the concluding issue of this six issue limited series crossover of He-Man and The Masters of the Universe and ThunderCats. Some readers will fine that these narrative devices rooted in the history of the universes and the characters. Other readers will see these cliches as a missed opportunity to stretch and grow these characters.

David and Goldfine maintained a strong mastery of franchise lore throughout this series. The breath of characters Freddie E Williams II integrated in the final two issues dug deep into the cartoons, comics, and toy lines. David and Goldfine pushed at the lore and developed it further in this series. During the final confrontation, deep within the inner chambers of Castle Greyskull, the characters battled for control of the Orb of Power. The Orb was referenced back in the mini-comics and read along books connected with the 1980’s action figure line. The Orb of Power was named in the 2002 cartoon series and the connection was made between the Orb and He-Man’s Sword of Power. All of these deep references demonstrate a care and knowledge of the lore. 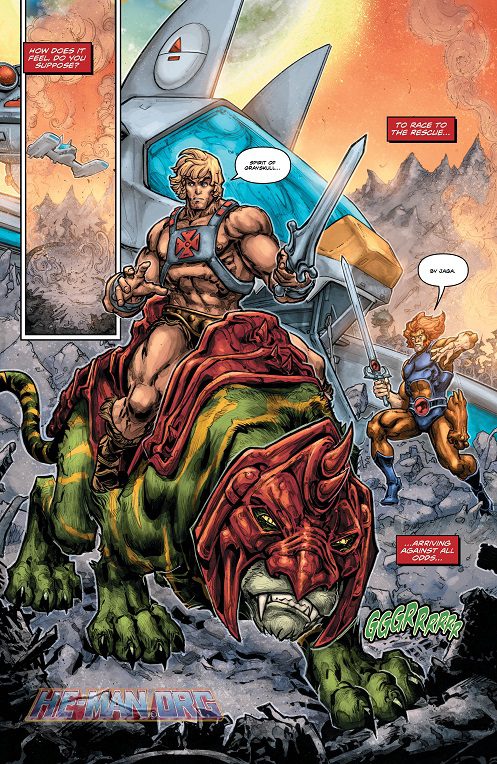 For all the respect for the lore during this final issue, David and Goldfine also returned to the some of the humor both franchises used during the initial cartoon runs. He-Man makes a quip about dimensional crossovers. Skeletor and Mumm-Ra banter about their power. This limited series has displayed a mature and often bloody visual style, but has also attempted to lighten the mood with humor. The violence created a weight and importance to the story, while the humor honored the cartoon crossover. Unfortunately, the two tones undercut each other trying to satisfy fans.

The challenge of balancing fan expectations and story motivations is present in the climatic battle as the characters hop from reality to reality and time period to time period. While a fun “what if” exploration of the franchises, it served little narrative point beyond fan service. Only one setting was relevant to the character development of Lion-O. Ultimately, the ending wraps up as neatly as a 30 min cartoon. The villains are banished for now. Heroes have learned more about themselves and made friendships. All that was missing was the life lesson at the end of the issue.

In today’s story, He-Man and Lion-O learned that working together allows people to accomplish more than doing things alone. Skeletor and Mumm-Ra found out that being greedy only hurts people, including themselves. These are lessons we all can remember at school, at home, and for you grown-ups even at work. Issue #6, while a little cliche, wrapped up this series like the cartoons these characters came from. And just like the cartoons, the journey was enjoyable but conventional.