At its core, Hellblade: Senua’s Sacrifice is a wildly cerebral experience that explores the effects and stigma of mental psychosis, a subject no video game has attempted to broach using this level of detail. You play as Senua, a female Norse warrior on a metapsychological journey into hell to free the soul of her lover and rid her mind of the “darkness” that possesses it. What makes Hellblade special is not its willingness to tread this uncharted ground, but rather the way it exposes players to the inner workings of Senua’s chaotic mind by creating a unique sense of perspective.

Hellblade accomplishes this level of empathetic immersion using sight and sound to intertwine players’ sensory responses with the game’s core theme. It opens to Senua rowing a broken tree limb across a mist-covered lake, the eerie shores of the path to hell peaking through the fog at the far edge of the background. Along the solemn approach to the shore, players first hear the “voices” that constantly echo in Senua’s mind as part of her psychosis. These omnipresent whispers act as Senua’s consciousness, speaking to the player throughout the game to assist in solving puzzles and defeating opponents. No tutorials or instructions ever appear on the screen. Instead, the voices guide the player and constantly taunt or encourage them in addition to helping drive the game’s narrative. These voices serve as the main source of the game’s dialogue, so it’s good that Hellblade’s voice acting (especially Senua herself) and the overall sound quality are top-notch. Each individual voice has a discernible pitch and tone and can be heard clearly over the game’s other well-crafted sound effects.

Senua’s psychosis also allows her to “see” things others cannot, and this element serves as the crux for Hellblade’s illusory puzzles. Players must utilize Senua’s “focus” (a zoomed in over-the-shoulder view) to see through these illusions. Using focus allows Senua to open paths that seem obstructed at first glance but can be traversed once they are focused on from a certain viewpoint. Some doors are also locked by glyphs that must be unlocked by finding their hidden shape in the surrounding environment and focusing on it. The voices also assist in this task by whispering when players are focusing in the correct general direction. It’s somewhat basic, but the puzzles become surprisingly complex and expect players to learn from previous techniques as they progress in difficulty.

Senua also experiences horrifying psychotic hallucinations throughout her quest. These episodes are used for different purposes during the game – sometimes they’ll simply jump-scare the player or drive the narrative, while in other instances they’ll transport Senua into a traumatizing past event that players must then escape. Senua will also succumb to psychotic breakdowns at certain points, which launches her into crazed and spectacularly animated monologues as the camera sweeps around her and pauses at certain angles for dramatic effect. The hallucinations combine with the haunting environments to create a horror element that sent more than a few chills down my spine and made me struggle to walk through some of the game’s creepier locales.

It’s the clever use of these innovative and unconventional gameplay elements that truly set Hellblade apart. Leveraging sight and sound as integral parts of the gameplay thrusts players into Senua’s psychosis, and that immersive dimension is what makes Hellblade something special. 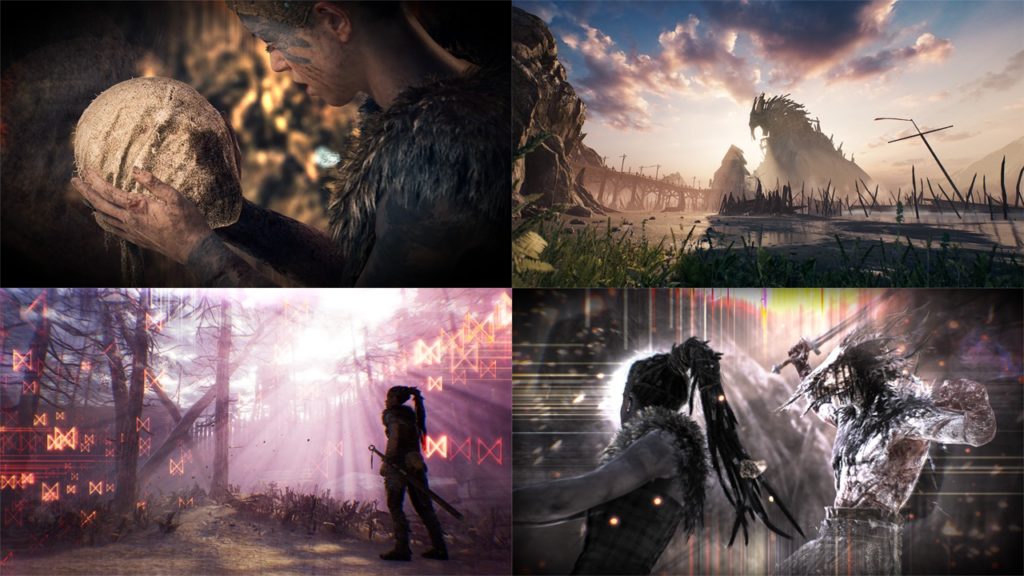 Hellblade’s conventional elements also gain high marks. The game performs well and runs smooth throughout its entirety. The graphics and realistic art style are impressive by any gaming standard, but more so when you consider the game was created by a team of 20 developers. Senua’s character model is meticulously designed, boasting expertly animated facial expressions and movements and gritty details like dynamic dirt and blood that contrast her blue tattoos. The game’s ghastly environments serve as the foundation for the dark and twisted ambiance and are superbly detailed using deep, rich colors. The once-inhabited ocean-side lands on the path to hell are dense with destruction and decay, while hell’s underground dungeons and empty caverns make excellent use of shadow and lighting effects to keep the player on edge and fearful of what might lurk around the next corner. The barbaric enemies are incredibly detailed, their lumbering movements reflecting a natural and life-like gait.

Hellblade’s combat is also razor sharp and mechanically sound. Senua’s light and heavy sword attacks are executed with crisp precision, leaving glowing red gashes where they bite into foes. Players must also make frequent use of the dodge and parry systems to defend against enemy attacks or get the right angle on bigger and more heavily armed opponents. The focus ability can also be used in combat to slow time and execute lightning-fast attack combos. Hellblade’s combat system drives like a dream, but the attack animations get recycled far too often, so much so that you’ll probably see them all during the game’s first encounter. This gripe extends to enemy attacks as well. The limited variation works fine for the well-designed boss battles, but standard enemies become too easy to defeat as you quickly learn to predict their movements. Senua also never learns new moves or receives any upgrades, so combat doesn’t change substantially between the first and last encounters.

Have you seen this:
Hellpoint: A Fast-Paced Souls-Like

I also felt that the narrative, while excellent overall, did suffer from a few miscues in its initial delivery. I’ll admit that I was a bit lost in the beginning, especially since there’s no explanation of mechanics or any background story given at the start. Instead, psychosis-induced flashbacks and hallucinations divulge Senua’s relationship with her family and lover throughout the game while also uncovering the past events that lead to her descent into the underworld. The voices help Senua decipher these visions, and one of them serves as a guide that explains the mythological lore of the land. This storytelling method is essential to the overall immersion, but the plot is hard to follow at the start since it’s explained through distorted hallucinations as opposed to discernible cutscenes or dialogue. Understanding these visions takes time since it’s not really clear what’s real and what isn’t, which helps players empathize with Senua’s condition but left me a bit lost at first.

Despite this slight hiccup, Hellblade’s overall presentation and pacing is carried out with general perfection. It’s a short game, my playthrough clocked in at approximately eight hours. That shouldn’t come as a surprise considering its $30 price. There’s a small number of collectibles and no side-missions, items, or loot, which allows the initial momentum imparted at the game’s start to carry out until the end. This lack of content might seem like a drawback to some, but I like that Hellblade forced me to focus on the task at hand and stay immersed in Senua’s tale. My only issue pacing-wise was with the game’s second act. Throughout Senua’s journey, there’s a good balance between puzzles and combat, but the second act is an unabashed gauntlet of puzzles that leaves combat out entirely, which caused it to drag out a little too long and hindered the first act’s initial steam.

Overall, Hellblade: Senua’s Sacrifice delivers a beautifully designed and cleverly engaging adventure that transports players into the mind of a madwoman. You experience this madness along with Senua and come away with a greater understanding of her illness since Hellblade forces you to live through it yourself. The lack of combat depth and small gripes with presentation aren’t enough to bog down this immersive accomplishment. Its ability to help players understand a condition that’s hard to portray and difficult to imagine elevates video games as a medium, especially since mental illness is an increasingly important topic that should be approached more openly in today’s society.