So you’re telling me there’s a chance

It’s not often you hear of game developer Rockstar Games developing or porting a title to a Nintendo platform, but a hopeful individual asked the developer on Twitter whether it would bring Grand Theft Auto 5 to the Nintendo Switch, and here was the developer’s response: 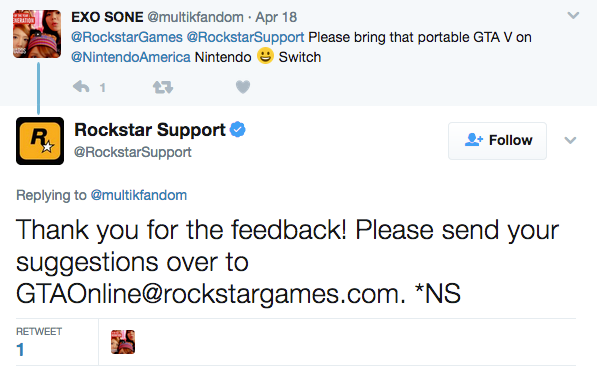 While this is only a response from the developer’s support team, it is a legitimate avenue for communicating to Rockstar Games that we want a GTA 5 port to the Switch.

We’ve heard rumors that Rockstar Games and Nintendo have been working together to bring L.A. Noire to the console/portable hybrid system, although, we probably won’t hear an announcement of that magnitude until E3.

L.A. Noire would probably be a better option as it wouldn’t be as technically demanding of the Switch’s hardware and allow Rockstar an inexpensive project to learn the ins and outs of the Switch.

And if you’re asking why either game would be worth playing again, remember that the Nintendo Switch is a portable console and even a small change such as mobility can change a game’s experience entirely.

Would you like to see Rockstar Games bring its titles to the Nintendo Switch? Let us know in the comments below!