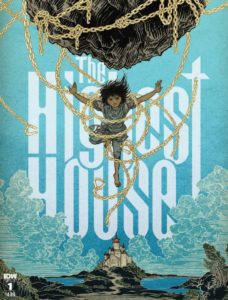 The Highest House #1 starts off quite interesting. We’re quickly shown a couple of our main characters. A man of fortune and power known as the Magister and a young boy named Moth. I very much enjoyed how the Magister is showcased as he shows up in a town only to buy slaves. This also paints a picture of how ugly this society is as so many are only looking to take care of themselves. You become quite disgusted with the townsfolk, as many are so quick to sell off members of their own family. Unfortunately for our main character Moth, a young boy. His mother does the same with him, she gives her reasons but for now, we aren’t really shown what kind of life these people will live as slaves.

We get a bit of mystery built onto Moth as the Magister decides to pay for the boy at a very high price. Right now the Magister shows himself to be 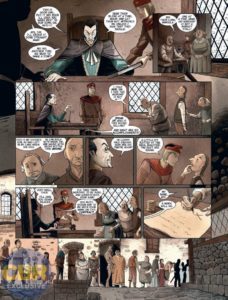 a good man, I’m not sure if he is someone to be fully trusted yet though. The new home for Moth is vast and looks wonderful from the outside. Everyone is given jobs and so far there isn’t a whip in sight for the slaves and none seem to be shackled. So right now it seems these folks may have a better life now unless there is something hidden from us about this place.

I felt as Moth was being led on to live a different type of life once they arrived at the Highest House, the name of Moth’s new home. But he’s given a job just like everyone else. So right now we don’t have him go into training to learn about certain elements in this world such as magic. There also isn’t much built around Moth outside of being a scared little boy who may be special for some reason. There’s a big focus on elaborating what has gone on in this world as it slowly gives us reasons to care for Moth and get curious about what his purpose may be. The art style here brings a certain sense of dreariness, which I rather enjoyed to help you get in the same mood as Moth. Highest House doesn’t leave you lost, you just wish it gave you a little bit more. Hopefully, the next issue will pick things up for Moth and see where he is heading.