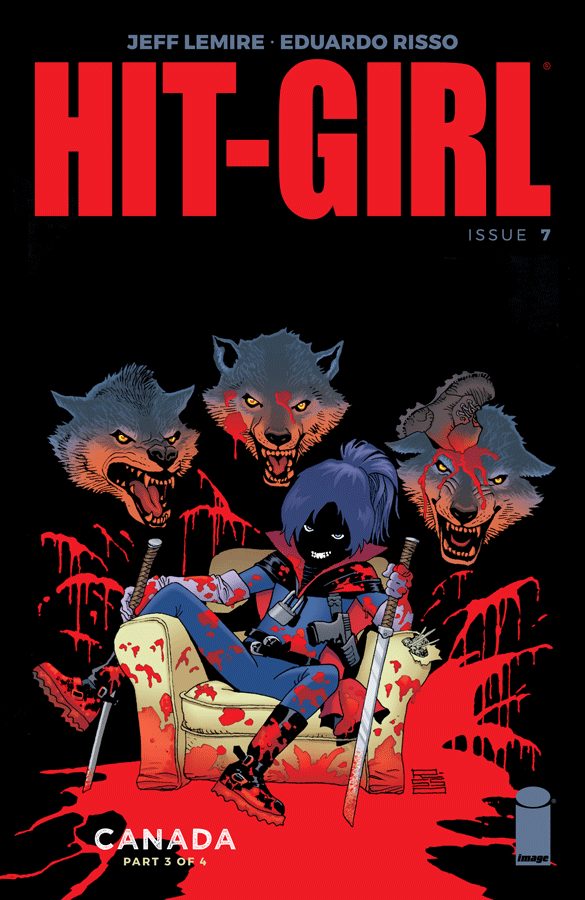 After a dispatching the entire criminal syndicate of Colombia, Hit-Girl continues her international quest for justice in Canada. Eisner Award-winning writer Jeff Lemire (Animal Man, Green Arrow, Bloodshot Reborn) takes over for Mark Millar and pens an adventure set in his snowy homeland. While Hit-Girl has always been on a mission for bloodlust, is this enough to justify the series?

In Part three of four, Hit-Girl has found herself in quite the conundrum. After dispatching the son of a crime lord and recovering from her injuries suffered in the previous issue (in which she was stuck in a bear trap), Mindy aka Hit-Girl has brought the unnamed man that saved her into harm’s way. The crime boss, who is the target of this foray into Canada, has the pair pinned down in a remote cabin and now she has to save the day with the help of her trusty weapons.

Artist Eduardo Risso (100 Bullets, Before Watchmen, The Dark Knight III) brings his signature style to Millarworld, presenting a clean style that befits the Kick-Ass universe. Steady and bright, each panel is a clear view of the action at hand. His art does also do justice to the beautiful Canadian environment, taking time to emphasize the snow and trees that cover the landscape. He also continues the trend in the Hit-Girl series of extreme violence on nearly every page.

Herein lies the problem with Hit-Girl as a whole – it is not often that we are given a rest from the sprays of blood and exploding limbs. It is even less often that we are given any character development or anything to latch onto besides panel after panel of excessive violence. Even Mindy’s savior, the character that is supposed to be the emotional crux of this issue, is given the bare minimum of development and somehow shoe-horns in an unnecessary (and incomplete) ghost story. The limited dialogue and obvious direction don’t do Lemire any favors, leaving readers with a bland story that will wrap up next month in what will most likely be another bloody showdown between Mindy and a crime boss.

At this point in the life of the both the Kick-Ass and Hit-Girl comics, the point seems to be nothing more than shocking and gratuitous violence. While this is fine for some (and even seemed novel in 2008 when the character debuted) it has since become stale and meaningless within the comic world. Even the characters in the book seem bored, spouting the same dialogue over and over again as if a young girl swearing is edgy in 2018. Where Kick-Ass has decided to move in a unique direction, Hit-Girl seems to take joy in remaining stagnant. So much more could be done with this character and one can only hope that the future sees more purpose for Mindy’s adventures.