I had the pleasure to sit down with Luke Arnold who stars as Silver on the Starz drama Black Sails. I wanted to find out his approach to this season considering that it will be the shows swan song as well his character’s evolution and a whole lot more. 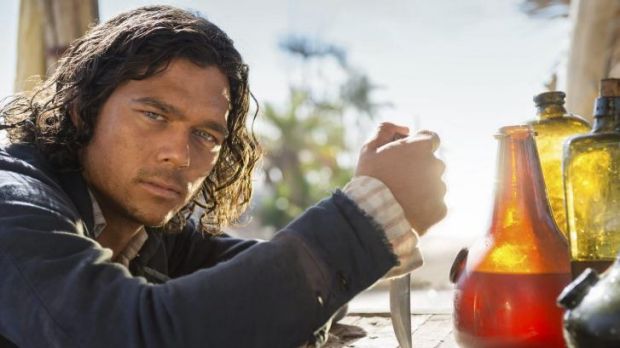 Hank (GWW): Can you talk about the tremendous evolution of your character Silver which seems to be the tale of one man living two lives. The way Silver started off the series seems like a lifetime ago compared to where he finds himself as this season starts.

Luke Arnold: It has been a real pleasure, its not often that you’re given a character that goes on such a journey. I’m really pleased with the way that we have been able to tell his story.

Hank (GWW): The public found out a few months back that this would be the Final season, how did that go for you guys? Was it something that you guys had mapped out for a while or is it something that became apparent to you recently or was it just kind of a last minute notification. (Laughs}

Luke Arnold: The writers always had kind of end point in mind and once we got into making season 4 i think everyone kind of felt like this could be it. I feel like what we are doing is ending the show when the story ends instead of any kind of outside influence. In season 4 the further we go into the story there is this kind of feeling that the end is kind of creeping into all of the characters lives. At the start of season 4 there is a lot of talk about the last battle and moving on and what this is going to mean. I think the story that we started telling 4 years ago, it kind of has a natural ending.

Hank (GWW): Does having the knowledge that this is the final season affect your approach or your portrayal of the character?

Luke Arnold: We have always worked very hard on the show with rehearsals, be it on the sets or afterwards around at each others places on weekends so that its kind of like a piece of theater to make sure we are really game ready for every scene. Even more so than usual knowing that we really had to stick the landing everyone pushed their work ethic to the limit to make sure that this season fulfills the promise of the last three seasons. 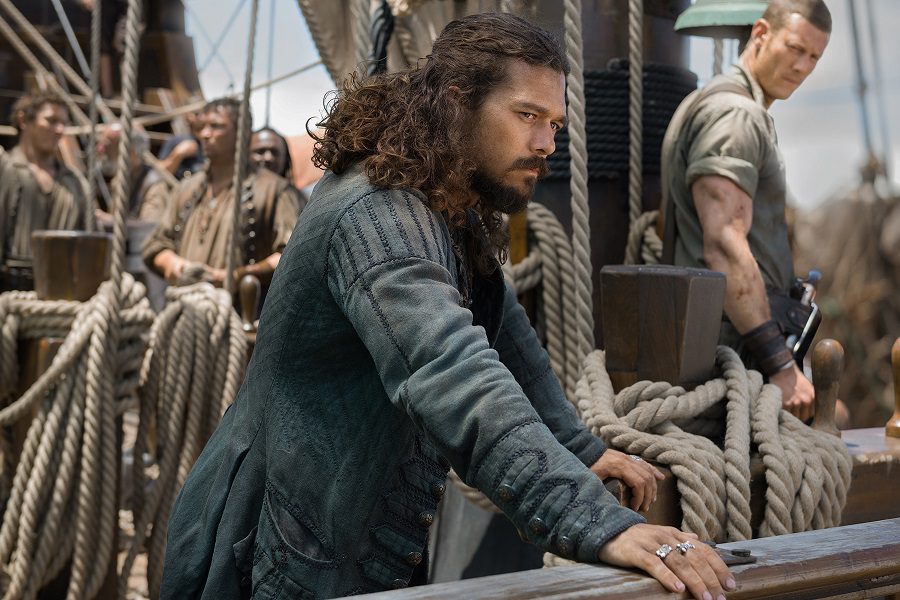 Hank (GWW): I think that one of the big story-lines from day one has been your relationship with Toby Stephens (Captain Flint) and the evolution of that relationship from the slickster of the crew that was kind a thorn in his side to a peer that he relied on to this season where it seems in some ways you become his superior. Can you talk about how that relationship has grown and taken different forms through the years leading to season 4.

Luke Arnold: That’s something that Jon Steinberg always said, that the central relationship to the show was Flint and Silver even though we barely talked to each other during the first season. I’m a thorn in his side, then i’m kind of his right hand man, then I’m the quartermaster that’s kind of part friend and antagonist to each other. At this part in season 4 its a whole new part of their relationship, they are closer to each other than anyone had been during the course of the show. When we start season 4 they are very much allied for the same cause, that relationship and the turn it takes is the real central thread of season 4. It takes many twists and turns within these last 10 episodes.

Hank (GWW): How do you feel with the evolution of your character who is now a leader of men, hes out front and hes putting it all on the line. There has been some tremendous character growth with Silver as hes been shaped by some extraordinary events and times.

Luke Arnold: Its really on looking back that you realize wow he was a different person not that long ago. He went through that time when he was kind of a coward ordering people from the back line and this season he really is on the front line and hes the first man going into battle a lot of times. Hes leading his men from amongst them and that’s very different than the man we first saw. I think that’s what happens when you kind of go through these traumatic events and different kind of pressures are put upon you. Hes been through alot between losing his leg, becoming the leader of a revolution. In season 4 from the word go hes put through even heavier things than what hes been through in the previous 3 seasons before. So I feel like I’ve played three different characters already and played almost three new versions of Silver in season 4 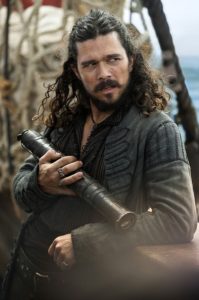 Hank (GWW): The biggest obvious change that Silver has undergone during the previous 3 seasons was when he lost his leg. The only replacement available was a barbaric peg which at the time was cutting edge medicine, for most men such an injury would be debilitating but for Silver it lit a fire within. The injury and subsequent peg served as a catalyst for Silver, can you talk about that and the challenges of working with the peg yourself.

Luke Arnold: It was brutal but at least I got to have my leg back at the end of the day. I’ve kind of been sharing the role with a guy named Ben de Jager who has lost a part of his left leg. He steps in for a lot of the shots from behind and some wider shots where you need to see Silver missing the leg, Ben would come in and do a lot of that stuff. It was amazing talking to him and some other people, other amputees and other people that had gone through similar stuff. They talk about there is a change in them and they talk about what its made them realize they can do and find this strength from within that they never knew was there. I think with Silver he was so adaptable and so kind of not really ever connected to anyone or any particular thing. What he gained was the respect of the men which was something he never had before and really wasn’t out to get. He also had a mindset that the last thing he wanted was for this to define him and to be seen as less of a man than he was seen before.

Hank (GWW): The question out there is that after this season concludes and Black Sails ends the next natural step would be something with Treasure Island. Is there any chance that something like that could happen or is that even something that you would be interested in?

Luke Arnold: I think we’ve had such a good time and i’m so proud of the show that the idea is appealing in a lot of ways. There’s also something at this point I think that everyone is very satisfied with what we were able to accomplish and how we feel about this final season. It could maybe happen and it could be interesting down the track. I think at the moment we are all very happy to walk away from what was one of the toughest shoots I could imagine being a part of. To know that no one ever let up caring about every piece of the story and being able to walk away and look at every piece of it and being happy with the result. We all had so much fun, maybe in like 5, 10, 15 years and if the audience continues to grow we might come back and do something when the times right but at the moment I think that we are going to let this land and I’m going to enjoy having both of my legs back. 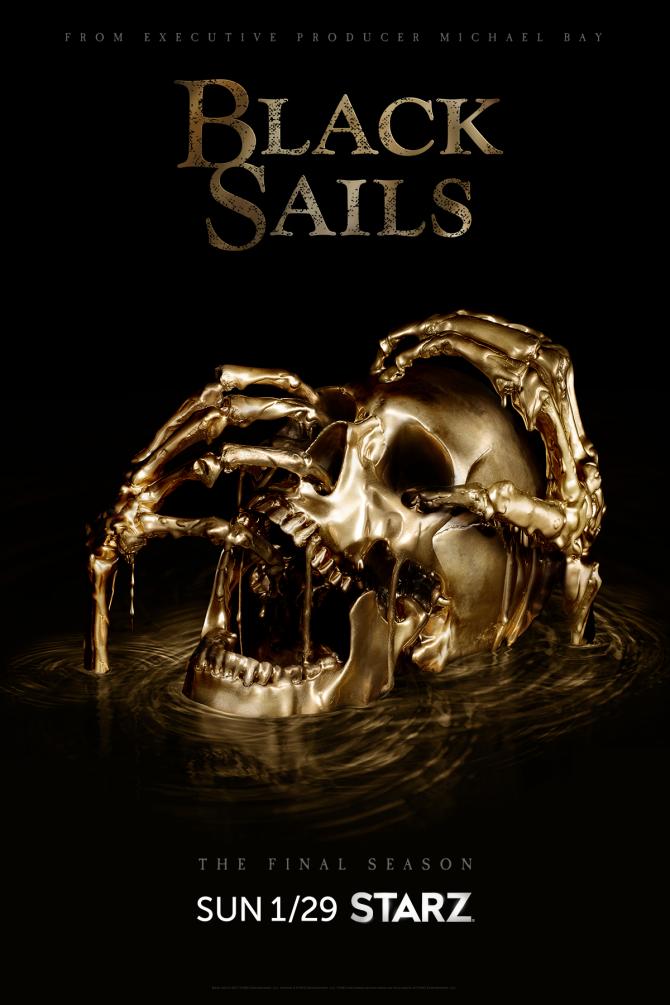 Luke Arnold really gave some tantalizing morsels about whats to come in this final season and blood is sure to spill on the high seas. Be sure to tune in to Starz Sunday January 29th at 9pm est for the premiere of the 4th and final season of Black Sails. Check out our continued coverage of Black Sail’s final season and more at www.thegww.com and you can follow myself on Twitter @SonOfNumenor313.