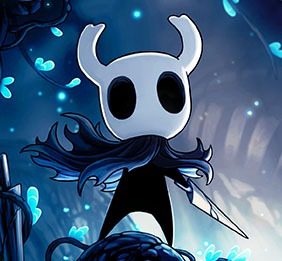 “Forge your own path in Hollow Knight! An epic action adventure through a vast ruined kingdom of insects and heroes. Explore twisting caverns, battle tainted creatures and befriend bizarre bugs, all in a classic, hand-drawn 2D style.”

In preparation for the sequel, “Silk Song”, we here at Geeks WorldWide (okay “I”) decided to take a look back at the first game, released back in February 2017, “Hollow Knight.” Yes, this was my first time playing it, and I have never heard of anything about the game before hand, so this is my fresh take on the game for PC. Originally what drew me to this game was the art style. The style was unique, and it absolutely thrilled me that a style I would normally see in Indie comics both online and in stores… was featured in a platforming video game. The style still holds up (I mean, it’s only been three years!), and still looks wonderful.

The controls throw me off a tick. Arrows allow you to move, which is standard, but jump and attack are “z” and “x”, and that threw me off 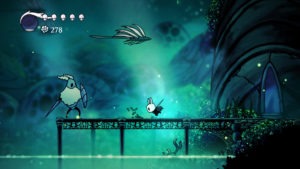 when “space” is normally one of those actions. Regardless of that fact, the controls are decently spaced for using both hands on the keyboard, and all the animations/ gameplay play through smoothly. It runs smoothly and there are no stutters or delays while playing.

There are so many hidey-holes and paths in this game that you can go in literally any route, and find a way to meet new characters and villains. I’ve played a couple of times already, and I’ve discovered so many different paths, and ended up finding two different bosses – when I could’ve sworn I went that way before.

I haven’t even fulfilled this hero’s journey yet, but I can’t wait for the sequel. The art style and music leave me wanting so much more, and luckily, “Hollow Knight: Silk Song” has been stated to be coming out this year!