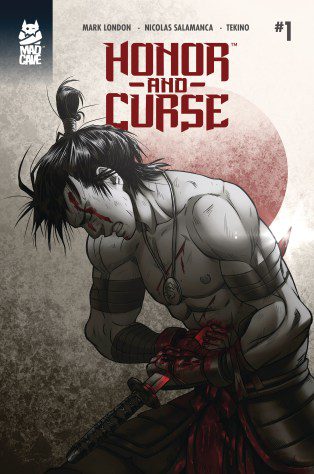 Writer Mark London delivers a Japanese epic with katana killings that would make Samurai Jack blush. I feel a kinship with his main character, the warrior Genshi. I’ve never been in a fight before, but I am like a shinobi on a quest–every day, I skip breakfast and seek out my next favorite book. Could this be it?

I picked up this book with high expectations. Mad Cave’s other titles have thrilled me. Honor and Curse checks many boxes with enough blood for a Vampire rave and more hacked limbs than a Star Wars game without the parental controls.

The content is mature. Adult themes, violence, and sexual innuendo make the target audience clear. Diverse readers can appreciate strong voices for male and female characters, especially the rebellious Akemi. I’m looking forward to learning more about a group of murderous kunoichi (female ninja) running wild. These Kunoichi are only mentioned in the first issue but it seems they’re giving the male lords nerves as tight as their top-knots. Is it bad that I’m already rooting for them?

London keeps the stakes high with a mysterious protagonist, forbidden love, and the constant threat of death lurking at the end of each page. Salamanca and Tekino Artwork is stellar and a visual feast for the eyes.

I give the book a 10/10 and recommend you pick it up ASAP, as it’s already in a second printing.