HUMBL BEGINNINGS…..RISE OF THE NFT ENGINE.

OWN PLACES • SAVE MEMORIES

Everyday we create memories that are attached to places, but how will future generations know what happened to us?

Metablox is saving our most important memories on the blockchain, and you can own the real world places the memories happened.

HUMBL beginnings…..rise of the NFT engine.

Will the NFT craze stall out?

“ In December 2020 the sale of NFTs was estimated at $12 million but exploded to $340 million two months later in February 2021. Indeed, the rising success of certain NFTs raises fascinating questions about what “value” and “scarcity” might mean with respect to blockchain technology. The non-fungibility of a digital asset itself appears to have created an entire category of digital objects to which individuals would ascribe value; and while non-fungibility is a property that is tangential to the original premise of a distributed virtual ledger, it may come to represent a significant alternative space of blockchain development and exchange going forward. “

Simply put, an NFT stakes your claim to establish ownership of “insert item here” on the blockchain. Minting an NFT today is akin to a modern-day gold rush. Go west young man and while you’re at it, stop at HUMBL HQ in San Diego, Ca. Once upon a time in history, a horse and buggy were status symbols. Henry Ford wrecked that philosophy real quick and subsequently revolutionized the world. HUMBL is on the cusp of changing the game.

“Three different blockchain evolutions can be identified: Blockchain 1.0, 2.0, and 3.0. Blockchain…. Blockchain 2.0 is about registering, confirming, and transferring contracts or properties. Application fields range from the use of blockchain as a decentralized copy of local databases (especially for public records and attestations) to more sophisticated applications. The most relevant feature of Blockchain 2.0 is the integration with smart contracts 1.0 is strongly related to Bitcoin and cryptocurrencies…. In Blockchain 3.0, the application field is no longer restricted to finance and goods transactions, but embraces sectors like government, health, science, education, and more.”

–Valentina Gatteschi, Fabrizio Lamberti, Claudio Demartini, Chiara Pranteda & Victor Santamaria, To Blockchain or Not to Blockchain: That Is The Question, IT Professional 62 (March/April 2018), IEEE Computer Society.

Possession is nine-tenths of the law and the anticipation of HUMBL’s TOKEN ENGINE is set to establish the bar to which others will be judged.

“You have to “get over that perception that I have to physically be able to touch it,” Cuban says, “and realize that’s more hassle, the joy of ownership is really what matters. You get all the benefits of the joy of ownership… all the value creation—or loss, for that matter—the friction-free trading and transacting, the ability to pay royalties to the original creator after every sale, which is enormous, and enables more creativity to come to the marketplace.”

How can someone monetize or take the lion’s share of this business? 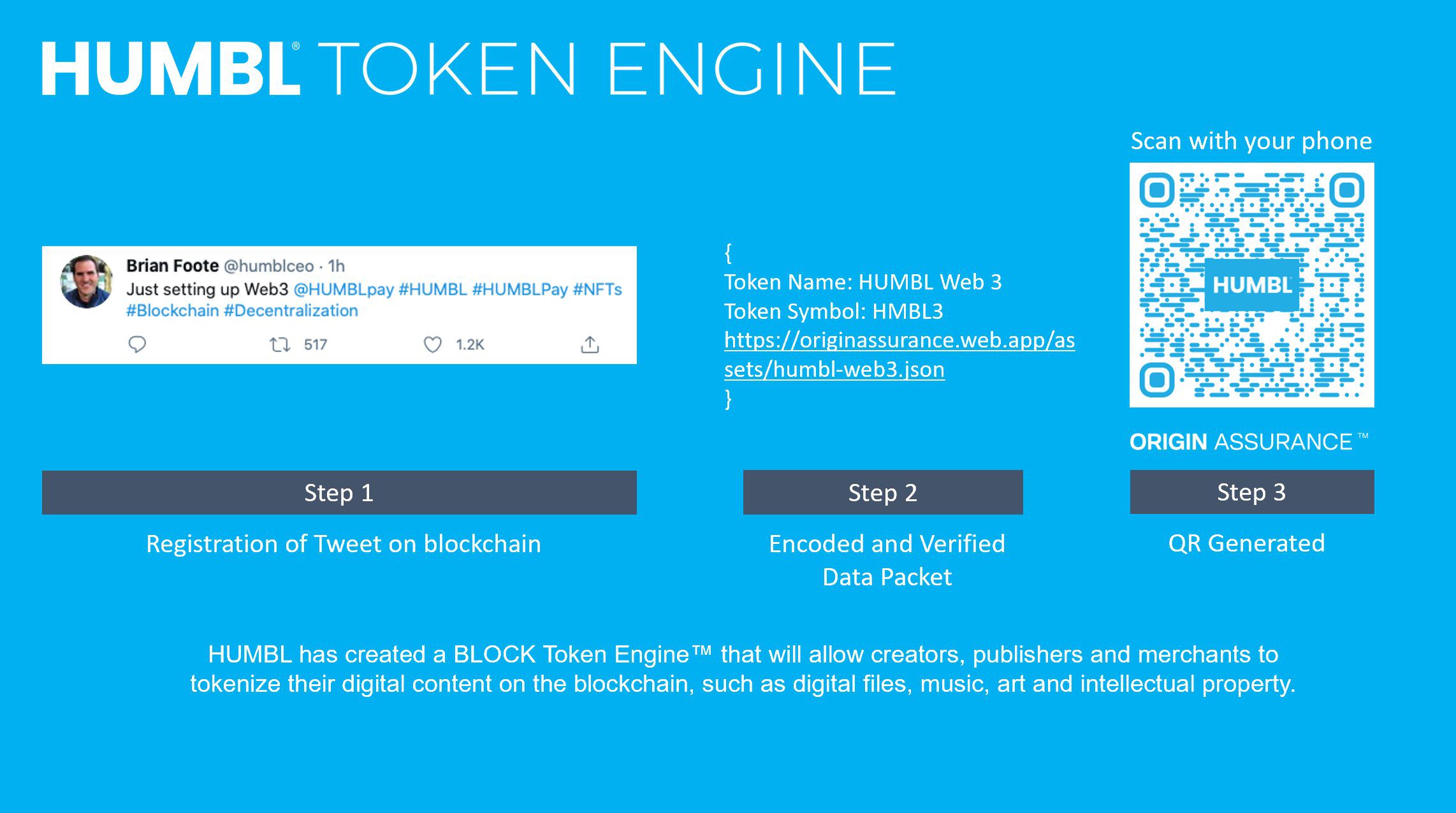 HUMBL’s upcoming TOKEN ENGINE may have just dealt a death blow to the Notary profession. The days of hunting down a Public Notary after hours may come to an end. Now you do it yourself with HUMBL’s token engine. In a world where being first is perceived as being the best, HUMBL is developing a new layer to their super app that will only add to their global footprint. Real Estate, Art, Music are about to transfer the ownership of said creations back to their creator.

The next time I hit up a Portland Trailblazer game for DAME TIME, I expect to see disgruntled ticket scalpers. Perhaps HUMBL & TICKERI could influence professional franchises to sell their season tickets on the blockchain. Every time a ticket changes hands….the issuing team will get a cut. It’s brilliant. It’s groundbreaking. It’s fair and it’s HUMBL. 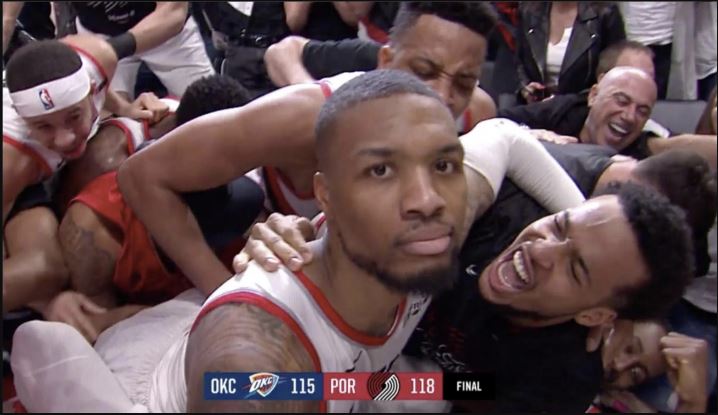 Westbrooks uncle (Damian Lillard),  should create an NFT but I’m not entirely sure owning Russell Westbrook & Paul George off the court is legal. Dame should at the very least slap an NFT on the real estate he owns in their heads.

The entertainment industry would be wise to capitalize on this advancement of technology as well.  Taylor Swift’s fight over ownership of her music has been a custody battle of epic proportions. Imagine if she minted her art through an NFT. 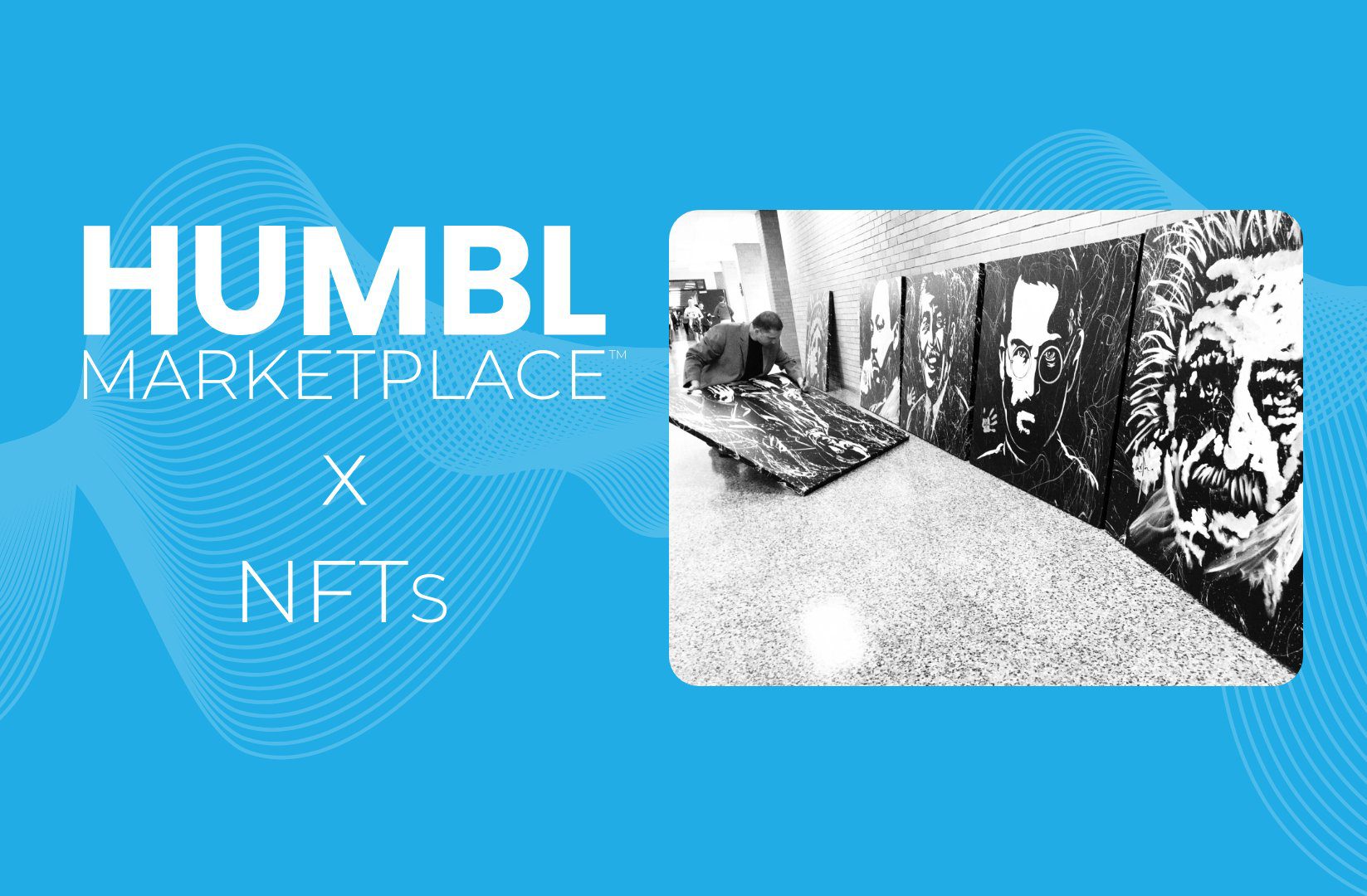 “NFTs and the related concept of the blockchain hold the promise to, in part, give people ways to make their work more valuable by creating scarcity. There is promise in letting creators rely less on middlemen including social media companies, art dealers, and streaming music companies.”

I believe music companies will be forced to sing another tune. Take it or leave it offers will go by the wayside. Write your hit & run it through the Token Engine. Marshawn Lynch said it best, “take care of y’all chicken”.

“ After a year with no live performances, musicians hope to connect with their fans on the blockchain and make up for lost revenue by selling them non-fungible tokens.” For example, “Electronic-music artist Justin Blau, known as 3L U, fetched 17 million… from NFTs, helped in part by a tokenized release of his three-year-old album ‘Ultraviolet,’ which grossed 11. million and briefly held the record for the highest price paid for a single NFT, 3. million.” Musician Justin Blau observes, “It’s a way to monetize your fan base in a way that’s never been possible… I think this technology will definitely change the world, but I’m cautiously optimistic because no one really knows how to value this stuff.”

Professional athletes are recognizing the importance of NFTs as well. The NCAA should learn to love it. Your favorite college basketball player is about to take their future into their own hands. One shining moment is about to become one shining NFT.

“Michael Jordan and Kevin Durant are among those betting that the company behind NBA Top Shot is poised to build on the craze over digital collectibles. Dabber Labs Inc. said… it raised 305 million from investors… [valuing] the company at 2.6 billion.” 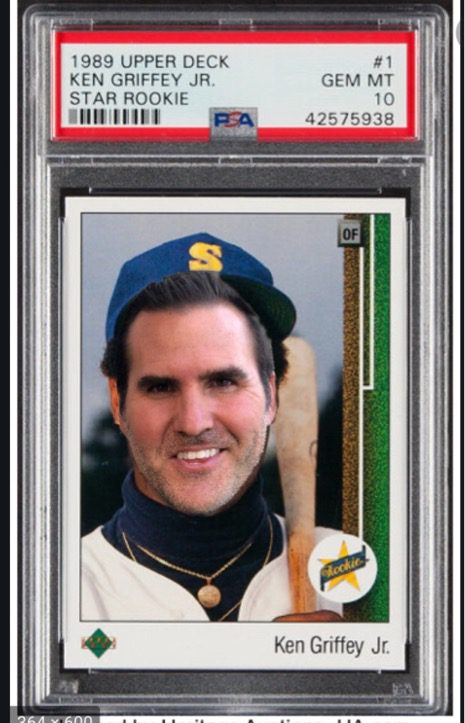 HUMBL is a penny stock and those types of companies are worthless…right?

Remember when Apple was below 5 dollars? How about Amazon? What do those companies have that HUMBL doesn’t? The answer is simple. TIME. If it doesn’t make cents it won’t make you dollars. The gestation period of an African Elephant is approximately 2 years. HUMBL is 6 months old. You can earn now….or you can chase later. Success isn’t a right but rather earned. Mr. Foote and the crew have been tirelessly working to change the world.

“We aren’t building HUMBL for the 350 million customers using PayPal®, but for the 7 billion people for whom money moves in different pathways, formats and cost structures,”

If you’re paying attention, HUMBL could very well be changing your zip code at the same time. Twitter user @RebeccaHumbl has her finger directly on the pulse of this blockchain sensation. A recent tweet has garnered a significant amount of views in a very short amount of time. To put this in perspective, she had 6,279 followers (but garnered 153.5K views) at the time of writing this story. I think an awakening is happening before our eyes. Don’t blink. 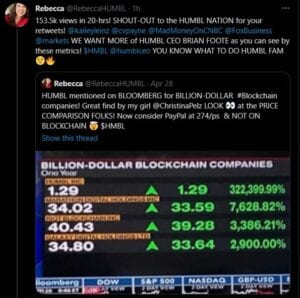 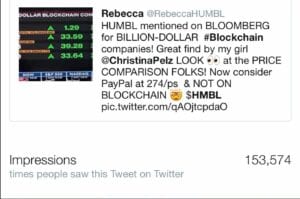 Stay Humbl… this story has only begun.

Humbl is available in the Apple App Store and Google Play.

If this article has proven to be helpful and you wish to send any form of gratuity, I am accepting BTC & ETH in my HUMBL wallet which has ZERO GAS FEES when transferring within the HUMBL app.