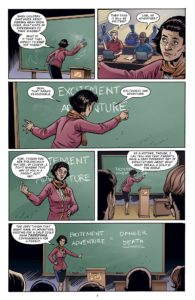 This series is so brilliant!! I’m still in love with the whole idea of your imaginary friends becoming evil and telling you to kill people!!! The art absolutely blows my mind! From the creatures and the colors, it’s fabulous!

We pick up where we left off as Polly Peachpit and Charlie Chokecherry are going at it, not in a good way either. They are tearing each other to shreds while poor Loretta lays on the floor unconscious and Omari crawls around crying. Let me just say that I am surprised at Polly Peachpit’s turnaround. She’s developed feelings for Omari and saves him from Charlie and in the process, she ends him.

Special Agent Crockett is still tripping balls at this point and ends up being visited by Mercy after he tries to blow everyone up. She brings him back to reality by making him remember what he’s good at. It’s a good thing she brought him back to reality because he almost drowned in fantasy land while talking to her. Crockett is on the search for Piranha Solution. 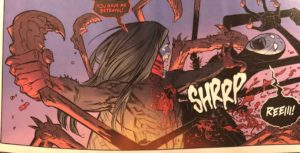 When we had left off Melba Li was abducted by the creepy cat people. They brought her back to Fraidy Cats barn where the other cat children are living. Fraidy Cat says that Melba needs to be reborn and stabs her with what looks like Pussy willows. Fraidy Cat seems horrified to find out that Melba is not afraid after all and doesn’t need reborn. She then sicks the creepy cat children on her to kill her but a stranger appears to save her! Cameron is back and not to save Melba but to have it out with Polly Peachpit!!

My thoughts on this one? It was a bit confusing at first and I had to read it a couple of times but it was still amazingly weird and epic! I’m excited to see the next issue!!!