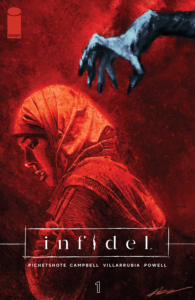 “Racism’s a cancer that doesn’t get cured. The best you get is remission.” Bestselling editor Pornsak Pichetshote (Swamp Thing, Unknown Soldier, The Losers) makes his comics-writing debut with Infidel, a haunted house tale that tests the social boundaries of modern horror.

After relocating with her husband and stepchild, Aisha is a Muslim American woman brought into a new world that is not as accepting as she’d hoped.  Aisha constantly battles the perception that comes along with her religion, whether it be people on the street or her own mother-in-law. Each day Aisha is exposed to prejudice from all angles, including her own family. Her new surroundings aren’t helping, as she and her family have taken residence in a run-down building that was recently the site of a mass murder. To make matters worse, Aisha is suffering surreal and visceral nightmares that seemed linked to the tragedy that took place in her new surroundings.

The horrors that Aisha will face are not just found in the eyes of those that condemn her culture, but also in the many shadows that cloud the halls of her new home. Outside of the opening panels, it is not until more than halfway through the first issue that we see the ghosts lurking in the shadows. It is with the introduction of the otherworldly antagonists that we see the true depth of the story – this is not your average haunted house story, this story steeped in the hate that fuels xenophobia in the modern world.

“The horror stories I was reading and watching felt a little too trapped in amber. Like they were talking about the fears of yesterday when one glance at the news made me feel we have so much more pressing things to be scared of today,” wrote Pichetshote. Taking this idea to heart, Pichetshote joins the movement of “woke horror” that brings the genre back to the cultural critique found in the films and stories of the 1970s and 80s. The demons in this story are not only real and evil beings that feed off the hate of those around them but they’re also found in the actions of the real world people that interact with the Aisha. As a Muslim American woman in a white family, she is caught between worlds having sacrificed contact with her family to marry a man not of her faith. The dichotomy of her split life parallels the ghosts themselves and their straddling of the line between the living and the dead.

Many panels show the new family dynamic that Aisha deals with, including an untrustworthy and prejudiced mother-in-law and a husband whose own anger issues act as a barrier to understanding. The xenophobia isn’t left to one side, as shown in a short conversation that Aisha has with her progressive sister. “My mother’s obsessing overshadows in a room full of light,” Aisha says. Even as she sees the disruption and social chaos around her, Aisha still chooses to look for a balance and peace to her new life.

Artist Aaron Campbell (The Shadow, Harley Quinn, Green Hornet) brings a great sense of balance to each page, clearly showing the paranoid nature of the tense settings.  Perfectly complementing the art is colorist Jose Villarrubia (Promethea, Inhumans, Hungry Ghosts). By using unusual color pallets we are more aware of the intensity and dread of each harrowing sequence.

Conscious horror depends on its capacity to delve into the psychology of the modern world and the terrors that lurk around us. By exploring the real world feelings that fuel the mysterious creatures that haunt Aisha, Pichetshote and company look to offer a new perspective on a classic haunting story.